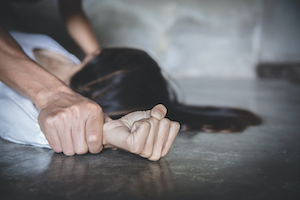 The best Stamford criminal defense lawyers would agree that a charge of strangulation can have a significant impact on your future along with very serious consequences. Strangulation is a crime that is often associated with domestic violence arrests . It can be charged as a nondomestic violence offense also. The common theme among all strangulation crimes is restraining someone by the neck or mouth. The degree of the strangulation crime varies depending on the mental intent of the actor and the injury sustained by the victim.

Strangulation is a serious crime, and a conviction for this offense could carry significant jail time, hefty fines and lengthy periods of probation.

You need an experienced Stamford domestic violence defense attorney to investigate the circumstances surrounding your arrest, find the most effective way to combat the allegations against you, and explore every possible alternative to get the charges dismissed. We have empathy for the situation that you are facing, and we realize that you are undergoing a lot of uncertainly, stress, and frustration.

The Statutory Definition of Strangulation

Strangulation in Connecticut has three different levels ranging from a misdemeanor up to a Class C felony. In this section, we will discuss the statutory elements of the crime and some possible defense strategies which present themselves to defending these allegations.

Strangulation in the Third Degree - Class A Misdemeanor

This crime is punishable by up to one year in jail, a fine, and probation.

This crime is punishable by up to five years in jail, a fine, and probation.

This crime is punishable by up to ten years in jail, a $10,000 fine, and probation and is a severe offense for which you need to retain a Connecticut criminal defense attorney.

You Can Not Be Convicted for Strangulation; Assault and or Unlawful Restraint for the Same Incident / Crime

If you are arrested for the charge of strangulation for a domestic violence offense, you will be issued a temporary order of protection by the police and also required to appear in court the next morning after your arrest. It would be a great idea to retain a Stamford domestic violence defense attorney to go with you to the arraignment and give you advice and representation. During the arraignment, the court is going to make some critical decisions that will have a lasting impact on your life during the duration of the case, which could take several months to resolve.

When you get to court the first step is a meeting with a family relations officer. The purpose is to decide what kind of conditions of release are needed and to get your input on what kind of criminal orders of protection the court will be entering and to provide you with some necessary information about the process of a domestic violence case. While you are speaking with family relations, keep in mind that just as with a police officer, everything you tell them could be used against you. Thus, I always recommend that clients do not discuss any details of the alleged incident itself. The best solution would be to have a Stamford domestic violence defense lawyer sitting by your side during the interview to protect your rights.

In the case of strangulation, most likely, the court is going to impose some variety of criminal order of protection while the case is pending. These orders protect alleged victims, and they vary in level or degree based upon the circumstances of each case.

Criminal orders of protection come in three different levels. The least invasive and entry-level order is known as a "partial" order, which will impose a court order that you do not harass, assault, or annoy the other party while the case is pending. The next level of criminal order of protection is known as the "full" order a/k/a residential "stay away"criminal protective order which has all the same conditions as the "partial" order while allowing you to engage in normal contact with the victim but which prevents you from entering the home where the victim resides. The final type of criminal protective order is the "full no contact" criminal protective order, which literally means do not have any contact with the victim. It must be noted that any violation of a criminal order of protection, no matter how trivial, is a felony

The best Stamford criminal defense lawyers would agree that a strangulation allegation could be resolved with several methods. My objective is always to obtain a dismissal of all charges that leaves the client without a criminal record. The formula for organizing a winning defense strategy means working harder and smarter than the police and knowing my client and the facts of the case thoroughly. It starts with a detailed initial client intake interview, to listen carefully to your version of the events and get to know you. Next, we will scrutinize the police report and the victim's statements to identify every error and inconsistency.

In many cases, we can move to exclude evidence if there has been a violation of your Constitutional rights. If the facts support it, there may be a need to hire a private investigator to dig a little deeper into the history of the victim. Once we have carefully gone over all of this background information and considered every available defense option, we will be in a position to advise you concerning the most effective defense strategy possible with the objective of having the charges against you dismissed.

I have seen that in many allegations of strangulation, the accused client was actually only attempting to fend off an aggressor who was raining down fist strikes and blows and the act of restraining the victim by holding the victim by the neck was a defensive act. In cases of domestic violence, the police often make what is known as a "dual arrest" in Connecticut. They do not take the time to sort out who was the primary aggressor and instead just arrest both parties involved and let the Court deal with it. Statistics show that in Connecticut, up to 30% of arrests for domestic violence result in dual arrests. Self -defense is a valid defense to an allegation of strangulation.

If you are charged with strangulation in the third degree, and the injury is minor, then a possible solution could be taking a course of anger management therapy, which could lead to a dismissal of the charges. Many strangulation third degree domestic violence cases have a successful disposition with some form of treatment or treatment, and a dismissal agreed upon through discussions with family relations and the state's attorney.

In cases of strangulation in the second degree, there are alternative methods available, which also lead to a dismissal of the charges. In domestic violence matters, they have their own diversionary program known as the family violence education program is a diversionary program. Basically, this is a 10-week educational program that has a class that meets once a week. If admitted to the program, successful completion would result in a dismissal of all charges.

We are prepared to defend your case at trial when appropriate. There are many methods of defending strangulation charges which go beyond the scope of this brief introductory web page and which may apply to your case. There is no substitute for a free initial consultation where I can review all of the specific details of your case and provide you with more individualized recommendations.

Let Us Fight Your Strangulation Charge!

We provide free initial consultations. I have over 25 years of experience defending criminal charges throughout the State of Connecticut. During your initial consultation, we will go over your goals of the representation, which are usually a dismissal or a reduction of the charges and go over any unique concerns that you may have. Hiring an experienced Stamford domestic violence attorney can make the difference in having your case dismissed or reduced down to a lesser charge.

Do not hesitate to contact Attorney Friedman today. We work on a flat fee basis, and our rates are reasonable. We offer payment plans as needed. Call Attorney Friedman at (203) 357-5555 to schedule your free initial consultation. We are available 24/7. Or you can contact us online for a prompt response.