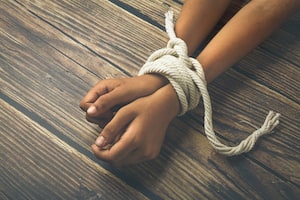 There is no time limitation on this crime. You can be charged with this crime for restricting someone for 1 minute or 1 hour. Also, this crime does not distinguish in the degree of the restriction placed upon the victim. Thus, as stated above, you can be charged with this crime for not allowing someone to leave a room momentarily. In more serious cases, you could be accused of this crime for refusing to allow someone to exit a motor vehicle and traveling for extended distances with them against their will. If your actions pose a substantial risk of physical injury to the victim, the crime would become C.G.S. § 53a-95 – unlawful restraint in the first degree.

To be convicted of the crime of C.G.S. § 53a-96 unlawful restraint in the second degree, the state's attorney must be able to prove the following elements of the crime:

1. The defendant restrained another person

A man is arguing with his wife. The situation becomes very heated. The wife says she is leaving. The man blocks her from leaving the front door and says, “you can't go until we are done with this discussion.” The woman calls 911. The man promptly allows the woman to walk outside and wait for the police. The man could be charged with unlawful restraint in the second degree in violation of C.G.S. § 53a-96 because he did not allow his wife to leave when she wanted to.

A man is arguing with his girlfriend. She starts walking away, and he grabs her by the hair and holds her in place and continues to yell at her preventing her from leaving for a few moments before releasing her. The man could be charged with unlawful restraint because he restrained the woman, and he could also be charged with assault in the 3rd degree.

In both of the above examples, unlawful restraint in the second degree would be charged as a domestic violence crime due to the relationship of the parties.

Self-defense is the most commonly employed defense to these kinds of allegations. It is widespread in domestic violence confrontations for an alleged victim to launch a violent physical attack against the accused and then call 911 on the accused after the accused restrains the alleged victim to defend himself. It is legal to restrain someone who is attacking you.

Consent is another defense that is less commonly employed. If the accuser consented to be restrained, then the cat is not illegal. This kind of situation frequently arises in S&M sexual bondage role-playing were one party feels the other participant went too far and calls the police.

Another defense that is often employed is to claim that the alleged victim's presence was voluntary. Particularly in domestic violence cases, there are many motivations for victims to make false accusations. In many cases, we have seen victims fabricate claims of unlawful restraint.

The accelerated rehabilitation program is a common diversionary program available to resolve unlawful restraint allegations for first-time offenders. For those charged as a domestic violence crime, the family violence education program would be the appropriate program to resolve these allegations. Anyone who is considering the use of a diversionary program for a serious criminal offense such as unlawful restraint should consult with an experienced Connecticut criminal defense attorney.

A violation of C.G.S. § 53a-96 unlawful restrain in the second degree is a Class A misdemeanor punishable by up to a year in jail and a fine of up to $1,000.

Criminal Defense for C.G.S. § 53a-96 - Unlawful Restraint in the Second Degree

If you or a loved one have been arrested for unlawful restraint in violation of C.G.S. § 53a-96, you should immediately speak with an experienced Connecticut criminal defense attorney. Stamford Criminal lawyer Allan F. Friedman has over 30 years of experience defending unlawful restraint allegations. Attorney Friedman will fight to have the charges against you dismissed and obtain the most favorable result possible.

For more information about defending unlawful restraint allegations in violation of C.G.S. § 53a-96, contact Stamford criminal lawyer Allan F. Friedman at The Law Offices of Allan F. Friedman to arrange your free, no-obligation, initial consultation. Our offices are located at 24 Hoyt St #A, Stamford, CT 06905. Mr. Friedman can be reached 24/7 at (203) 357-5555, or you can contact us online for a prompt response.