What you Should Know About Stalking Laws in Connecticut 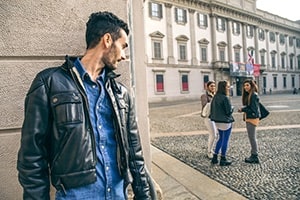 Stalking is a crime that is treated very seriously in Connecticut. A conviction or even an arrest for stalking can have significant adverse reputational consequences. Connecticut Stalking statutes cover a wide range of behaviors ranging from repeatedly waiting outside someone's home or place of work, sending repeated unwanted gifts, disturbing communications, or conducting electronic surveillance. As society has become more and more technologically advanced and online, privacy expectations and technology have come into conflict.

Many of our clients had found themselves arrested for stalking when they only were trying to court someone that they may have met dating online. In some situations, a hypersensitive victim who is suffering "emotional distress" due to their psychological issues makes a complaint to the police, and an arrest warrant can be issued for stalking. Remember, an arrest requires only probable cause, which is a low evidentiary standard.

A robust defense strategy planed by an experienced Connecticut criminal defense attorney often can lead to a dismissal of the charges against you.

In 2017 Connecticut significantly expanded the scope of actions that constitute stalking within the definition of the General Statutes. Regrettably, many web sites are not up to date on these recent changes, and the information on them should be disregarded. A layperson imagines stalking as a crime that involves following someone or waiting for them in a creepy way that makes the victim uncomfortable. Under the recent changes to Connecticut's stalking laws, the range of behaviors that can be considered stalking was expanded, and the lowered the level of perceived danger that the alleged victim would need to experience.

The legislature made two significant changes to Connecticut stalking laws in 2017.

Lowering the Standard of Fear the Victim Needs to Suffer

Stalking is a crime that is closely related to the crime of harassment. Harassment can involve one or a series of communications that are obscene or intended to harass or annoy the victim in a manner likely to cause annoyance or alarm. In stalking, each message by itself may be rather benign. Still, the pattern and persistence of the messaging create a course of conduct that would cause a reasonable person to suffer "emotional distress."

Various Degrees and Types of Stalking in Connecticut

In Connecticut, there are three different degrees of stalking and the separate crime of electronic stalking. Stalking can occur between any two individuals, but most frequently, stalking occurs in the context of dating relationships, intimate partners, and married individuals. In these examples, stalking would be handled as a domestic violence crime. Domestic violence crimes are treated more seriously.

In every instance, a criminal order of protection will issue preventing further contact with the victim. Also, state's attorneys and judges treat all domestic violence cases very seriously due to recent examples in the media where fatalities and severe injuries have occurred in Connecticut in domestic violence cases.

Stalking in the third degree is a form of stalking, which is more commonly understood by most people as stalking.

To be convicted of stalking in the third degree, the state's attorney must prove that the accused:

A conviction for stalking in the third degree in violation of C.G.S. § 53a-181e is a Class B Misdemeanor punishable by up to six months in jail and a fine of up to $1,000 and a possible period of probation.

Example: A man meets a woman online and has a few conversations with her. The woman never agrees to meet the man. The man discovers that the woman works at a Starbucks coffee store, so he starts going there and waiting for her outside the store. The woman becomes very concerned for her physical safety and emotionally upset and calls the police. The man could be convicted of stalking in the third degree in violation of C.G.S. § 53a-181e because his action of willfully and repeatedly lying in wait for the woman without her permission would cause a reasonable person to fear for their physical safety.

Stalking in the second degree encompasses many different types of communications and behaviors which could be deemed to be illegal under this statute.

To be convicted of stalking in the second degree, the prosecutor must prove the following elements of the crime:

A conviction for stalking in the second degree in violation of C.G.S. § 53a-181d is a Class A Misdemeanor punishable by up to one year in jail and a fine of up to $2,000 and a possible period of probation.

Example: A man is dating a woman, and she decides to end the relationship. The woman asks the man to stop contacting her. The man continues to leave notes on her car, sends unwanted flowers to her job, posts messages on Facebook, and also asks his friends to send her messages on Facebook after she blocks him. The man could be convicted of the crime of stalking in the second degree in violation of C.G.S. § 53a-181d because Connecticut law defines "course of conduct" to include two or more acts, committed directly or through a third party that includes electronic and social media.

A conviction for stalking in the first degree in violation of C.G.S. § 53a-181c is a Class D Felony punishable by up to five years in jail and a fine of up to $5,000 and a possible period of probation.

Electronic stalking makes it illegal to use GPS devices to track other people, but the way that the statute is written limits its application to situations where the intended victim became aware of the existence of the tracking and reasonably feared for their physical safety.

To be convicted of electronic stalking, the state has the burden to prove the following elements of the crime:

A conviction for electronic stalking in violation of C.G.S. § 53a-181f is a Class B Misdemeanor punishable by up to six months in jail and a fine of up to $1,000 and a possible period of probation.

Example: A man installs a GPS device in his girlfriend's car because he suspects that she is cheating on him. After a couple of weeks, he needs to install a new battery, and a police car observes him removing the device from under the rear bumper of her car while it is parked in the parking lot at her job. The man could not be charged with a violation of electronic stalking in violation of C.G.S. § 53a-181f because the way that the statute is written it requires that the victim must have been aware of the existence of the plan to track her by GPS and suffer a reasonable fear for her physical safety as a result. In this example, the victim never even knew about the GPS device.

You can beat staling charges with a good defense. These are allegations that are treated seriously by the state, and you should speak with an experienced Connecticut criminal defense lawyer.

Our legislature lowered the standard from reasonable fear of physical harm to the new lower standard of "emotional distress." Still, the state has the burden to prove that the victim suffered emotional duress, which is something beyond mere annoyance. The law defines emotional duress as mental or psychological suffering. In many cases, we have seen alleged victims exaggerate their response to actions that involved courtship. It is frankly ridiculous that we have gotten to the point that a man who sends a box of candies and flowers to a woman could be charged with stalking on the theory that the gifts were unwanted. Staking cases are often not as black and white as the police make them out to be, and often the state can not prove that the accused's actions would cause a reasonable person to suffer emotional duress.

There are a lot of people sitting in jail right now who were wrongfully convicted, and even more people every year are wrongfully accused of crimes based upon false accusations. When a victim who has ulterior motivations fabricates false allegations of stalking behavior, it becomes a he said/she said situation unless there is concrete video surveillance. In these situations, it is essential to carefully review every document and conduct a defense investigation to discredit the victim's claims.

You can't be arrested for the crime of stalking for engaging in constitutionally protected expression. For example, engaging in a protest outside someone's work like an abortion clinic on a daily basis because abortion is against your religious believes could not constitute stalking, although it may greatly disturb and annoy the workers at the clinic.

For those who are accused of a stalking offense who have no prior criminal record, the most economical and expeditious solution to having these type of allegations dismissed without having to plead guilty or accept responsibility. Successful completion of a diversionary program will result in a dismissal of the allegations and the sealing and erasure of the criminal file. Frequent diversionary programs utilized in stalking cases are the family violence education program and the accelerated rehabilitation program. You should discuss the facts and allegations of your case with a qualified Connecticut criminal defense lawyer before making any decisions on how to defend your case.

If you have been charged with stalking, you should speak with a Connecticut criminal defense lawyer as soon as possible to go over the details of your arrest. With 28 years of experience in defense of criminal charges in Fairfield County and throughout Connecticut, Attorney Allan F. Friedman can give you sound legal advice. Was your arrest lawful? Have your constitutional rights been violated? Our objective is to use every means possible to have the charges dismissed or thrown out, or significantly reduce the charges.

We work on a reasonable flat fee basis. Call Attorney Friedman at (203) 357-5555 to schedule your free initial consultation and case evaluation - we are available 24/7 - 365 days a year. Or you can contact us online for a prompt response.