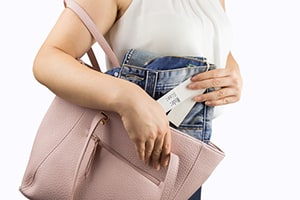 If you have been arrested for shoplifting it is important to retain a Stamford shoplifting attorney as soon as possible to protect your rights. Surveillance evidence which could vindicate you may exist. It is imperative to take immediate aggressive legal action to force stores to preserve any exculpatory evidence before it is lost or erased. Shoplifting may seem like a minor crime but the State’s Attorney takes shoplifting charges seriously and they can have major consequences upon your future reputation and employment prospects, not to mention the possibility of jail time, probation and fines. That is why you need a zealous advocate with 25 years of experience in defending shoplifting allegations in Stamford on your side. Contact the Law Offices of Allan F. Friedman today for your free initial consultation / case evaluation.

With the rise of internet shopping, brick and mortar stores and shopping malls are facing ever shrinking profit margins. They are investing heavily in loss prevention efforts to curb loses due to stolen goods. For this reason we have seen an explosion in shoplifting arrests in the Fairfield County area. We understand that often people can be wrongfully accused of shoplifting who had no intention of stealing anything. Walking out of a store and accidentally forgetting to pay for one item because you were distracted by your children, for example, is not a crime. Intention to steal is a required element of the crime of shoplifting. With 25 years of experience as a Stamford shoplifting lawyer the Law Offices of Allan F. Friedman will fight for your rights and explore every option to try and have your charges reduced or dismissed.

Why Choose the Law Offices of Allan F. Friedman?Shoplifting Investigations

Shoplifting arrests work a little differently than most other types of criminal investigations in that with shoplifting cases first contact is usually met with a store’s loss prevention team which will detain you, with force if necessary, and conduct their own investigation while they await the arrival of Police officers to respond to the store. You have the absolute right to remain silent, refuse to answer any questions and insist on speaking to a Stamford shoplifting defense lawyer before you answer any questions. Upon the arrival of the Police you are only required to provide your name and address. DO NOT make any statements. Do not be fooled by police tactics or promises to “go easy on you if you cooperate”. The bottom line is that they are trying to build a case against you and everything you say can and will be used against you. If you make an admission to Police often that seals the case against you and negates any possible defenses which you may have to the charge. It is time to bring in an experienced Stamford shoplifting lawyer from the Law Offices of Allan F. Friedman to take control of the case, assert your constitutional rights and work minimize any potential consequences. You can contact an experienced Stamford shoplifting crimes lawyer 24/7 to stop the Police interrogation dead in its tracks at (203) 357-5555.

In most cases shoplifting in Connecticut is charged as larceny in the 6th degree. There is no specific crime of “shoplifting” it is a type of larceny. Section 53a-119 of the Conn. General Statutes defines larceny as “intent to deprive another of property or to appropriate the same to himself or a third person, he wrongfully takes, obtains or withholds such property from an owner.” Forms of shoplifting include:

Based upon the value of the goods alleged to have been stolen in the particular case, a shoplifting crime can be charged anywhere from a relatively minor class C misdemeanor which has a maximum penalty of 3 months in jail and or a $500 fine all the way up to a Class B Felony which can be punished by up to 20 years in prison and or a $15,000 fine. The Level of the offense charged is based upon the value of the property stolen.

No matter the type or level of shoplifting crime you are charged with, let our 25 years of experience as a shoplifting attorney serving Stamford go to work to get the best possible result for your case.

The good news is that many shoplifting offenders are first time offenders and often we are able to present a strong argument of mitigation and explanation and have the charges dismissed in exchange for community service hours or a charitable donation. We have found over the years that many first time shoplifting offenders may be going through some very stressful life circumstances which effected their concentration and judgement at the time of the arrest and that the incident was an isolated event in an otherwise law abiding life. A second option for resolution of shoplifting charges is the Accelerated Rehabilitation Program. Here is link with more information about the details of the Accelerated Rehabilitation Program and what goes into preparing a winning argument for admission into the program. If you successfully are granted the Accelerated Rehabilitation Program and do not pick up any new arrests during the probationary period all the charges will be dismissed. This is a very desirable outcome. Due to the stigma attached to any shoplifting or larceny conviction (which is a public record) and its effects on your ability to secure future employment, housing, getting into educational institutions and any other position that requires a background check it is imperative that we obtain a dismissal of all shoplifting charges against you whenever possible.

For those who are charged with Shoplifting that have a prior criminal record for larceny or shoplifting our strategy is different than for the first time offenders. Connecticut has enacted some quite severe enhanced penalties for repeat larceny offenders. If you have two prior convictions of larceny, then a third conviction for a misdemeanor level shoplifting offense can be enhanced to a D felony level offense and punishable by up to five years in jail. Obviously, those who have prior larceny convictions need to contact an experienced Stamford shoplifting defense attorney who can fight to protect your rights, identify any defenses to the charges and negotiate a reduction in the charges.

If you have been charged with a shoplifting crime, you should speak with a Stamford shoplifting lawyer as soon as possible to go over the details of your arrest. With 25 year of experience in the defense of shoplifting charges in Stanford Attorney Allan F. Friedman can give you sound legal advice. Was your arrest lawful? Have your constitutional rights been violated? Our objective is to use every means possible to have the charges dismissed or thrown out, or significantly reduce the charges.

We work on a flat fee basis and our rates are very reasonable. Call Attorney Friedman at (203) 357-5555 to schedule your free initial consultation and case evaluation – we are available 24/7 - 365 days a year. Or you can contact them online for a prompt response.

Criminal Defense
Connecticut Criminal Lawyer Blog - Shoplifting
Client Reviews
★★★★★
Attorney Friedman is the best!! He was extremely helpful and put me at ease with staying on top of my case leaving me with little to worry about. He is hardworking and was extremely flexible with my work schedule in setting up appointments and phone calls. His worth ethic, compassion, and fair price point really set him apart! Raul M.
★★★★★
Not only does Allan give exceptional legal advice, but he also takes the time to get to know his clients on an individual level. He is always available to answer questions, and he is truly dedicated to achieving a fair outcome in each case he is presented with. Knowledgeable, professional & compassionate. Highly recommend! Jennifer S.
★★★★★
Allan has been my personal attorney for over 10 years. He is creative, had working, dedicated, tenacious, and incredibly reliable. I highly recommend him, please don’t hesitate to contact him for service. George K.
★★★★★
I would highly recommend Attorney Allan F. Friedman to anyone seeking counsel in Connecticut. He represented our family's interests in a very professional, fair and effective way. I would give him my highest endorsement. Greg S.
★★★★★
Absolutely Exceptional Attorney. I give Allan a 10 out of 5 - he is that good and far beyond excellent!!! Allan handled my traffic matter with the highest level of professionalism, empathy and efficiency that anyone could ever ask for… Jose
★★★★★
This man literally saved my life! I had a criminal mischief and domestic charge along with a protective order put on me. Atty Friedman successfully got me into the required needed to have these charges dropped. Then came the felony protective order violation...Long story short I walked out of court today with all my charges nolled. Anonymous
View More
Submit a Law Firm Client Review