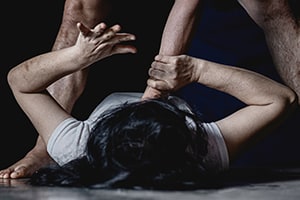 The only difference between regular strangulation and domestic violence strangulation is the relationship between the accused and the victim. Strangulation is prosecuted very seriously, as it is a crime that can result in serious injuries or even death.

To prove a violation of C.G.S. § 53a-64bb, the prosecutor must prove the following elements of the crime beyond a reasonable doubt:

A husband and wife are arguing, and the discussion becomes heated. The wife starts to scream loudly, so the man tries to silence his wife by placing his hands over her mouth and nose. The man restricts his wife from breathing long enough to cause medical evidence of strangulation. The man could be accused of strangulation in the second degree in violation of C.G.S. § 53a-64bb.

A boyfriend and girlfriend have a heated argument. The girlfriend then loses her temper and physically attacks the man. The man tries to fight the woman off of him, and he grabs her by the neck for a short period of time to attempt to restrain her. Because the man did not intend to restrain the ability of his girlfriend to breath or restrict the circulation of her blood, he could not be charged with strangulation in the second degree, but he could be accused of the lesser offense of strangulation in the third degree in violation of C.G.S. § 53a-64cc if his actions are not deemed to be entirely self-defense.

There are several valid defenses to strangulation allegations. The statute itself creates a statutory defense to the crime.

Another essential defense task is to retain an experienced investigator to gather exculpatory evidence.

Armed with medical and investigatory information, a skilled Connecticut criminal defense attorney can often negotiate a reduction of the charges to a lower level of strangulation than initially charged or, in some cases, obtain an outright dismissal of the charges.

For offenders with no prior criminal record, the use of a diversionary program would result in a dismissal of all the charges. The accelerated rehabilitation program is an available option to resolve strangulation in the second-degree charges without having to plead guilty or wind up with a criminal record. For those offenders who have been charged with strangulation as a domestic violence offense, then the family violence education program would be the appropriate diversionary program.

The penalty for a violation of C.G.S. § 64bb – Strangulation in the second degree is a Class D Felony for which you can face up to five years in jail and a fine up to $5,000.

Criminal Defense for Strangulation in the Second Degree

If you have been arrested for strangulation in violation of C.G.S. § 53a-64bb, you should immediately speak to an experienced Connecticut criminal lawyer. Stamford criminal lawyer Allan F. Friedman has over 25 years of experience defending strangulation allegations. Attorney Friedman will work hard to get the charges against you dismissed or significantly reduce the possible penalties.

For more information about defending strangulation allegations in violation of C.G.S. § 53a-64bb, contact Stamford criminal lawyer Allan F. Friedman at The Law Offices of Allan F. Friedman to arrange your free, no-obligation, initial consultation. Our offices are located at 24 Hoyt St #A, Stamford, CT 06905. Mr. Friedman can be reached 24/7 at (203) 357-5555, or you can contact us online for a prompt response.