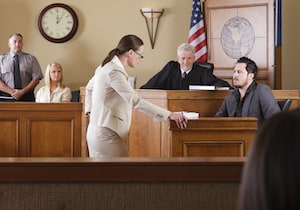 Perjury under Connecticut General Statutes §53a-156 involves intentionally provides false information under oath. The truth is an essential foundation of our justice system, and perjury is a crime that undermines the ability to find the truth. This felony crime applies to testimony and false sworn statements offered in any official proceeding such as court hearings, depositions, and administrative hearings. While perjury is not a commonly charged crime in Connecticut, it is important to take this allegation seriously as it is a felony and a crime of moral turpitude.

To be convicted of perjury in violation of Connecticut General Statutes § 53a-156, the state's attorney must prove the following elements of the crime:

You can be charged with perjury for making intentionally false statements under oath on various settings:

A man is being deposed in a divorce case. When the deposition commences, he is placed under oath by the court reporter taken the testimony. The man intentionally provides false answers during the depositions concerning his financial assets. The man could be arrested for perjury in violation of C.G.S. § 53a-156 because he deliberately lied under oath about a material fact, and he knew his testimony was false.

Connecticut General Statutes § 53a-151 - Tampering with a Witness

In most situations, perjury arrests in violation of Connecticut General Statutes § 53a-156 are commenced through an arrest warrant application. Just because the police can secure an arrest warrant does not mean that there is sufficient evidence to prove the guilt of the accused at trial. An experienced Connecticut criminal defense attorney can determine if valid legal defenses apply to your case, which negates the state's ability to prove the case against you beyond a reasonable doubt.

Good Faith Belief that the Statement was True

This statute requires that the actor intentionally made a false sworn statement or testified falsely under oath about a material fact. If someone sincerely believes that something is true, they can't be prosecuted for perjury because they are mistaken about the truth. Perjury is meant to apply to actors who purposely testify falsely.

When people make mistakes, can't recall events correctly or exaggerate, they can't be charged with perjury because the crime of perjury requires the actor to know that what they were saying was false. Since perjury is an intentional crime, the state has a high standard of proof to establish at trial.

Fact is not Material

To prove a violation of C.G.S. § 53a-156 the state has to prove that the accused testified falsely about a material fact. If the false statement is not material to the proceeding's outcome, then the charged can't be prosecuted for perjury.

Someone accused of perjury who has no prior record of a criminal conviction might want to discuss the possibility of using a diversionary program. A diversionary program such as the accelerated rehabilitation program can dismiss a perjury allegation and leave you with no criminal record if you satisfy the program's requirements.

This is why we are determined to provide all our clients with five-star customer service and exceptional representation, even when faced with the most stressful and trying circumstances. If you have been arrested for perjury, contact our Connecticut criminal law firm today at (203) 357-5555, or you can contact us online for a prompt response.