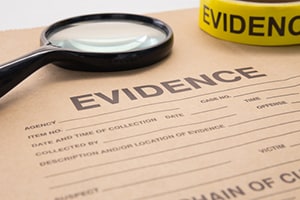 Physical evidence is often the most reliable form of proof of a crime. Accordingly, courts place significant importance on the reliability and authenticity of physical evidence presented in a criminal proceeding. Connecticut's legislature has made it a serious felony to plant evidence or tamper with evidence that will be used in a criminal investigation or proceeding. It is essential to realize that the statute extends to criminal investigations and official proceedings, which "are about to be commenced."Hence, it is important to not participate with others in the destruction or alteration of evidence.

The Crime of Tampering with Evidence Requires a State's Attorney to Prove the Following Facts:

To be convicted of tampering with evidence in violation of Connecticut General Statutes § 53a-155, the prosecutor has to prove the following elements of the crime:

A man kills his estranged wife. He chops up her body and buries it in the woods. He asks his girlfriend to help him drive around Hartford and discard garbage bags filled with bloody clothes of the victim and cleaning products used to clean up the crime scene. Since the items discarded were physical evidence of a murder that the man and his girlfriend would have reasonably believed would have soon been the result of a criminal investigation, their action would be illegal tampering with evidence in violation of Connecticut General Statutes § 53a-155. In this example, it does not matter that the criminal investigation had not started. The circumstances of the accused's actions would be evidence of their state of mind that they believed a criminal investigation was imminent.

A man is dealing drugs out of his apartment in an urban area of town. The narcotics task force suddenly appears at his front door, attempting to break down the door with a battering ram. The task force has a search warrant to search the premises, and they yell out "police search warrant"as they are starting to break down the door. The man rushes to the toilet and starts to flush narcotics down the toilet. The officers apprehended the man as he is dumping drugs into the toilet. The man could be charged with tampering with evidence in violation of Connecticut General Statutes § 53a-155 because he tried to get rid of the evidence when he knew the police were coming into his apartment to seize the drugs as part of their investigation.

A man submits a forged medial document at a worker's compensation hearing. The man could be prosecuted for tampering with evidence in violation of Connecticut General Statutes § 53a-155 because he submitted an altered document in an official proceeding. Additionally, if he was under oath, he could also be charged with the crime of perjury.

If you think that you might be under criminal investigation, it is always best to talk with a criminal lawyer before you destroy any evidence. This includes computer records and social media posts. Before you delete or destroy any evidence, speak with an experienced Connecticut criminal defense attorney about the best approach to take to protect your Fifth Amendment rights against self-incrimination while assuring that you do not expose yourself to a felony charge of tampering with evidence.

You have to take an allegation of tampering with evidence seriously as a conviction for this crime has serious consequences. An allegation of this nature can have significant reputational harm. Being a convicted felon can affect your ability to seek employment, work in various occupations, and even affect your ability to find housing. If you have been charged with tampering with evidence, your first call should be to an experienced Connecticut criminal defense attorney.

Connecticut General Statutes § 53a-155- tampering with evidence is a class D felony punishable upon conviction by up to five years in jail and a fine up to $5,000.

At the Law Offices of Allan F. Friedman, we strongly believe in the presumption of innocence and your right to a fair trial and aggressive defense. This is why we are determined to provide all our clients with five-star customer service and exceptional representation, even when faced with the most stressful and trying circumstances. If you have been arrested for tampering with evidence, contact our Stamford criminal law firm today at (203) 357-5555, or you can contact us online for a prompt response.