Home
Connecticut General Statutes
C.G.S. § 53a-151 – Tampering with a Witness 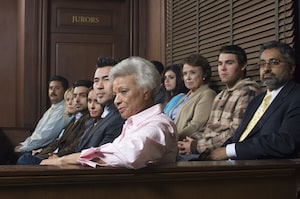 Discouraging a witness from testifying, or attempting to get a crime victim or witness to testify falsely about a pending criminal case or other "official proceeding" is a criminal offense under Connecticut law. Many people do not understand how easy it is to pick up a witness tampering allegation or how serious this crime is. Tampering with a witness in violation of Connecticut General Statutes § 53a-151, is a Class C felony punishable by up to ten years in jail.

In our experience we have seen a lot of people who have been charged with domestic violence crimes later charged with witness tampering for trying to convince their spouse, girlfriend or partner to "drop the charges." It is important in the context of domestic violence cases to be cautious when discussing the case with the victim. If possible, it is best to avoid having any discussions about a pending case with a victim or a witness. Our policy has always been to utilize private investigators to facilitate all contact with witnesses who wish to provide statements for the defense.

To be convicted of tampering with a witnessin violation of Connecticut General Statutes § 53a-151, the prosecutor has to prove the following elements of the crime:

1. The defendant believes that an official proceeding has been commenced or is about to be commenced; and

2. The defendant tries to get a witness to testify falsely; or

3. The defendant tries to get a witness to not testify; or

4. The defendant attempts to get a witness to avoid service of process; or

5. The defendant tries to get a witness not to attend an official proceeding to testify.

A man has been arrested for domestic violence offenses against his girlfriend and the mother of his son and charged with assault in the third degree, strangulation in the second degree and risk of injury to a minor. The court issues a full no contact criminal order of protection prohibiting the man from having any contact with his girlfriend while the case is pending. In violation of the terms of the court's order the man contacts the woman and warns her that unless she "drops the charges" and refuses to testify against him he is going to refuse to pay any child support for his son. The man would be guilty of both tampering with a witness in violation of Connecticut General Statutes § 53a-151 and also criminal violation of an order of protection in violation of Connecticut General Statutes § 53a-223.

A man has been a confidential informant working to help the police make narcotics arrests in Connecticut. The man is scheduled to testify in a few months in the criminal trial of a narcotrafficker. The narcotrafficker has a notorious reputation of committing violent acts against witnesses who testify against them and their families. The man's friend express his concern for his friend's safety and wellbeing because he fears that if the man is not given witness protection he may be facing personal danger if he choses to testify in the narcotrafficker's criminal case. This friend would not be guilty of tampering with a witness in violation of Connecticut General Statutes § 53a-151because he was merely expressing his concerns for his friend's safety and not attempting to get his friend not testify in the case.

A lawyer learns that his client is the subject of a criminal investigation for rape. The lawyer contacts the rape victim and offers to pay her the her the sum of $10,000 if she changes her statement to the police and denies that the crime ever took place. The lawyer could be charged with tampering with a witness in violation of in violation of Connecticut General Statutes § 53a-151, because he tried to get the victim to give a false statement in an official proceeding.

Related Offenses Defenses to Tampering with a Witness

Since this is a crime that requires proof of an intent to tamper with a witness the state often has a difficult time to prove this element of the crime beyond a reasonable doubt. If the defendant's intention was to cause the witness to testify truthfully then any conversations which took place would not be illegal. Similarly, if the accused was just speaking in generalities with the witness without any intention to influence their testimony it would be difficult to establish proof of the intent required.

Generally, witness tampering much like sex crimes is an area of the law that subject to a lot of false accusations. If a witness or victim claims that you said something to them in an attempt to get them to not testify or change their testimony of course they may be lying. Often it is their word against your word and since this is such a serious offense these type of allegations need to be treated seriously.

If you do not have any prior criminal record it might be possible to convince a judge that "good cause" exists why the accelerated rehabilitation program should be granted. The AR program is a diversionary program that could lead to the charges against you being dismissed. Since tampering with a witness is a Class C felony your attorney must convince the judge that "good cause" exists to grant the program.

You have to take a crime like witness tampering really seriously as a conviction could not only expose you to a significant jail sentence but any felony conviction has long term reputational consequences. Being a convicted felon can effect your ability to seek employment, work in various occupation and even effect your ability to find housing. If you have been charged with witness tampering your first call should be to an experienced Connecticut criminal defense attorney to work on your defense action plan.

Connecticut General Statutes § 53a-151- Tampering with a Witness is a class D felony punishable upon conviction by up to five years in jail and a fine up to $5,000.

At the Law Offices of Allan F. Friedman, we strongly believe in the presumption of innocence and your right to a fair trial and aggressive defense. This is why we are determined to provide all our clients with five-star customer service and exceptional representation, even when faced with the most stressful and trying circumstances. If you have been arrested for tampering with a witness contact our Stamford criminal law firm today at (203) 357-5555 or you can contact us online for a prompt response.