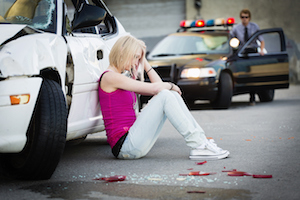 Evading responsibility, Connecticut General Statutes § 14-224, is also known as hit and run. It occurs when a driver involved in an accident leaves, rather than staying at the scene to provide their name and address or help someone who is injured. It is a very commonly charged crime in Connecticut. Often hit and run occurs when people panic and take off in terror. In other situations, individuals may be under the influence of alcohol of drugs and attempting to avoid being arrested for a DUI. A lot of people accused of this offense may not have realized that they were involved in an accident.

Evading responsibility cases that involve serious physical injuries or death are treated very seriously and are felony-level offenses punishable by years in jail. Hit and run cases involving property damage only are a misdemeanor level crime but must be defended aggressively as a conviction is a permanent criminal record and will result in a suspension of your license by the DMV. If you or a family member or loved one has been charged with evading responsibility, we encourage you to immediately contact our office to defend you aggressively and protect your driver’s license.

The following is an explanation of Connecticut hit and run laws, and the impact of a conviction for Connecticut General Statutes § 14-224 could have on your future:

This is a crime that requires that the State prove you knew that you were involved in an accident, in addition, the prosecution must prove the following additional elements of the crime:

A charge of evading responsibility may be brought under circumstances such as the following:

Connecticut General Statutes § 53a-57 – Misconduct with a Motor Vehicle

The State has the burden to prove all elements of a crime beyond a reasonable doubt. In some situations, we can establish that our client was not knowingly involved in a collision. Or perhaps you did stop, but you reasonably determined that the other person did not need assistance. Sometimes there are procedural issues associated with an investigation or arrest that might support a motion to suppress evidence.

For cases involving property damage only, a top Connecticut criminal lawyer will always attempt to convince the State’s attorney to lower the change to the infraction of failure to stop and show an insurance ID card. If that approach fails, often a diversionary program such as the accelerated rehabilitation program is a great way to have the charges dismissed and save your driver’s license. The accelerated rehabilitation program can also be used in cases involving physical injury. Every case is unique, and your first step should be to contact our office for a free consultation to determine the best approach to defending your case and achieving the best outcome possible.

Under Connecticut General Statutes Section 14-224, the penalty varies depending on the severity of the accident. Since often it is difficult to know the extent of the injuries to other parties involved in an accident, it is never a good idea to leave the scene of an accident. We realize that good people often make mistakes in stressful situations, and we are here to offer compassionate and zealous defense for clients charged with evading responsibility.

If the accident caused minor injuries, it is in an unclassified felony, and you can face a maximum of five years of incarceration, a fine of $75-$600, or both.

If the accident caused only property damage, it is a class A misdemeanor, and you can face a maximum of one year of incarceration, a fine of $75-$600, or both. Penalties in cases involving minor injuries or property damage increase to $100-$1,000 for subsequent offenses, although the maximum term of incarceration remains the same.

Evasion of responsibility charges can carry significant penalties and the loss of your driver’s license. If you are facing this type of charge or a charge for a related offense, you should not hesitate to contact Stamford criminal defense lawyer Allan F. Friedman. He can carefully review the circumstances leading to the charges and investigate all the available defenses and other strategies. Call us at (203) 357-5555 or contact us via our online form for a free consultation.