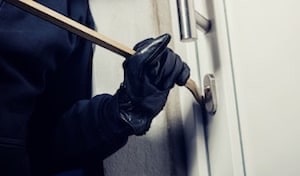 "Dwelling" for purposes of this crime has a very widely defined definition. It means a building that is usually occupied as a place lodging therein at night.

Burglary is a severe crime. A conviction for burglary can have serious consequences. If you have been arrested for burglary, you should immediately speak with an experienced Connecticut criminal defense attorney.

To prove that a defendant is guilty of a burglary in the second degree in violation of C.G.S. § 53a-102, the state must prove the following elements:

A man and his girlfriend are having arguments and have broken up. The man wants to get back together with the woman. He goes to her home, and she refuses to open the door. The man breaks open the front door and confronts the woman. When the woman tries to leave, the man blocks her way and makes her stay and listen to him. The man could be arrested for a violation of C.G.S. § 53a-102 burglary in the second degree because he unlawfully entered the woman's dwelling while at the same time his girlfriend was present with the intent to commit a crime inside. In addition, the man could be convicted of unlawful restraint in violation of C.G.S. § 53a-96. This is a domestic violence offense.

Anytime there is an allegation that someone entered a dwelling when someone was home, prosecutors will treat the case very seriously. In many cases, people are charged with this offense who did enter a home but lacked the mental intent to commit any crime therein. Since the state has the burden to prove that the accused has the intent to commit a crime, a skilled Connecticut defense attorney can often establish that the state lacks sufficient evidence to prove that crucial element of the crime.

C.G.S.§53a-104 established a statutory affirmative defense to all burglary charges. You can't be convicted for burglarizing and abandoned dwelling or building. The accused has the burden to prove the elements of the affirmative defense.

Many first time offenders may consider the accelerated rehabilitation program, which could be used to resolve burglary in the second-degree allegations. Because burglary in the second degree is a Class C felony, you would have to show "good cause" why the program should be granted. A successful AR application could lead to the dismissal of all the charges and result in you having no criminal record. This is an option you should explore with an experienced Connecticut criminal defense lawyer.

Criminal Defense for Burglary in the Third Degree

Courts and state's attorneys take burglary allegations very seriously. As a result, you should immediately speak to an experienced Connecticut criminal lawyer if you or someone you know has been accused of this offense. Stamford criminal lawyer Allan F. Friedman has over 25 years of experience defending burglary allegations. Attorney Friedman will work hard to fight the accusations against you, have them dismissed, or significantly reduce the possible penalties.

For more information about defending burglary allegations in violation of C.G.S. § 53a-102, contact Stamford criminal lawyer Allan F. Friedman to arrange your free, no-obligation, initial consultation. Our offices are located at 24 Hoyt St #A, Stamford, CT 06905. Mr. Friedman can be reached 24/7 at (203) 357-5555, or you can contact us online for a prompt response.