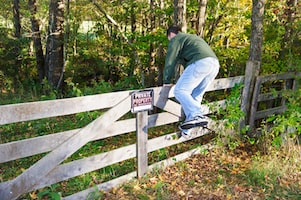 There are three levels of trespassing in Connecticut. Trespassing in the second degree is the mid-level strangulation offense.

In order to prove that a defendant is guilty of a violation of C.G.S. § 53a-108 the state’s attorney must prove the following:

A man decides to go to a public housing project to socialize with some other individuals who are drinking in the courtyard. No one is a resident of the housing project. There is a clearly posted sign that says no trespassing at all entrances. A passing police officer notices the activity and arrests them all for criminal trespass in the second degree. The man could be charged with trespassing in the second degree because he knowingly entered into housing project where he had no right to had no right to enter.

A city park has a sign that says it closes at 9:00 p.m. Several people enter the park around midnight and have a small party. They are drinking beers and listening to music. The people could be charged with criminal trespass in the second degree because they knowingly entered the park after 9:00 p.m. when the park was closed.

A group of photography enthusiasts from New York travel to Connecticut to take photographs of a abandoned building for its architectural design. A passing police office takes notice and arrests the men for criminal trespass in the second degree. These men could not be convicted for criminal trespass in the second degree because the building was abandoned. You can not be prosecuted for trespassing in an abandoned building.

Since this offense requires a mental element of criminal intent there are many opportunities to defend against prosecutions for criminal trespass where the accused acted without the required level of intent. Often people accused of this crime did not see trespassing signs and were totally unaware that they were not authorized to be there. In any criminal prosecution the state has the burden to prove each and every element of the crime beyond a reasonable doubt.

Often a skilled Connecticut criminal defense attorney can negotiate to lower this criminal charge down to the non-criminal infraction of C.G.S.§53a-110a simple trespass. A plea to simple trespass just involves the payment of a fine and is akin to a speeding ticket and is not a criminal offense.

For serious cases that can’t be otherwise resolved, first-time offenders who have no prior criminal record may want to discuss the possibility of applying for the accelerated rehabilitation program. The AR program is a diversionary program which would result in a dismissal of the charges against you. Using an diversionary program is not an admission of guilt. You should discuss the available options with an experienced Connecticut criminal defense attorney.

The penalty for a violation of C.G.S. § 53a-108 – Criminal Trespass in the Second Degree is a Class B misdemeanor for which you can face up to a six months in jail and a fine up to $1,000.

For more information about defending trespassing allegations in violation of C.G.S. § 53a-108, contact Stamford criminal lawyer Allan F. Friedman at The Law Offices of Allan F. Friedman to arrange a free, no-obligation, initial consultation. Our offices are located at 24 Hoyt St #A, Stamford, CT 06905. Mr. Friedman can be reached 24/7 at (203) 357-5555, or you can contact us online for a prompt response.