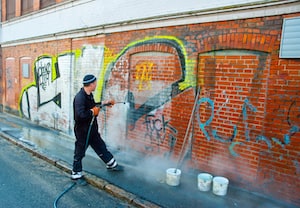 Under C.G.S. § 53a-116, Connecticut makes it a crime to intentionally damage, destroy, or deface another person's property valued at more than $250. Criminal mischief can be charged as a misdemeanor or a felony depending on the monetary amount of the property damaged. Criminal mischief also includes acts of vandalism and domestic violence disputes where property is damaged.

Criminal mischief in the second degree also criminalizes any intentional actions to disrupt public utilities or damage to property on public lands regardless of the value of the property.

While this crime requires an intent to damage property, intent can often be inferred through circumstantial evidence. Crimes that require a mental element of an intentional act are often more difficult for the state to prove.

This statute covers situations where property is defaced with graffiti, which includes any unauthorized mark or writing on someone's property. The damage to the property does not have to be permanent in nature, and the fact that the damage can be repaired either through the removal of graffiti or the repair of a broken fence, for example, does not negate the crime of criminal mischief.

A man and a woman are in the middle of a divorce. They have a heated argument, and the wife picks up the husband's phone and throws it across the room and the phone breaks. Since the phone has a value of over $250 the wife could be charged with the crime of criminal mischief in the second degree. Since the parties fall into the category of individuals who are in a marital relationship, this offense would be considered a domestic violence crime.

A man is highly intoxicated, and he is walking through a parking lot, and he purposely breaks rearview mirror of a car. Since the damage exceeds $250, the man could be charged with criminal mischief in the second degree.

In another example, a man is intoxicated, and he accidentally falls into a vehicle causing damage exceeding $250. He could not be convicted of criminal mischief in the second degree as his actions were not intentional.

In many circumstances, while there may have been damage to someone's property, that damage may have been the result of negligent or careless acts. These situations are not criminal offenses in violation of C.G.S. § 53a-116.

A prosecution for criminal mischief in the second degree requires proof of an intentional act. Establishing intent is a hard burden for the state and provides a fertile ground for defense opportunities when defending allegations of criminal mischief.

In other situations, clients have been the subject of false claims. This is particularly the case in domestic violence settings, where often there are individuals with ulterior motivations and financial incentive to fabricate false accusations.

The accelerated rehabilitation program is commonly used to resolve criminal mischief allegations for first-time offenders who have not previously used the AR program in the past 10 years. Successful completion of the AR program would result in a dismissal of the charges.

The best Connecticut criminal attorney's will fight hard to negotiate alternative plea deals to avoid their clients having to plead guilty to any crime. Often a skilled lawyer can resolve these kinds of allegations by having their client make restitution to the victim and perform community service in exchange for a nolle. If you have been charged with criminal mischief, you should speak with an experienced Connecticut criminal lawyer.

Criminal mischief in the second degree C.G.S. § 53a-116 is a Class A misdemeanor. A conviction for this offense can expose you to up to a year in jail and a fine up to $2,000.

Criminal Defense for Criminal Mischief in the Second Degree

If you or a family member has been arrested for criminal mischief in the second degree in violation of C.G.S. § 53a-116, you should promptly contact an experienced Connecticut criminal defense lawyer. Stamford criminal lawyer Allan F. Friedman has the experience to protect your reputation against these types of allegations and achieve the most favorable result possible.

For more information about defending criminal mischief in the second-degree allegations in violation of C.G.S. § 53a-116, and to arrange a free, no-obligation, initial consultation, contact Stamford criminal lawyer Allan F. Friedman at The Law Offices of Allan F. Friedman located at 24 Hoyt St #A, Stamford, CT 06905. Mr. Friedman can be reached 24/7 at (203) 357-5555, or you can contact us online for a prompt response.