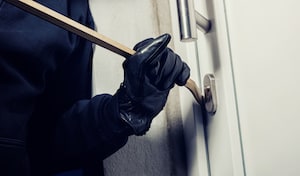 C.G.S. § 53a-103 is the statutory citation for burglary in the third degree. Many people equate the word burglary with theft, but under C.G.S. § 53a-103, burglary means the unlawful entry into any building with the intent to commit any crime. There are many different levels of burglary in Connecticut, and in extreme cases, the separate crime of home invasion may apply.

Burglary in the third degree can occur at any hour of the day or night.

Unlike the common law or the related offense of burglary in the second degree, there is no requirement that the burglary has occurred at night under C.G.S. § 53a-103. Also, burglary in the third degree does not require that anyone is present in the home or building at the time of the entry, unlike more serious degrees of burglary.

"Building" is classified very broadly to include a wide variety of locations, including airplanes, boats, railroad cars, homes, offices, retail stores, hotel rooms, and other places where someone could sleep overnight.

Burglary is a severe offense and needs to be dealt with seriously. If you have been charged with burglary you should promptly speak with an experienced Connecticut criminal defense attorney.

To prove that a defendant is guilty of a burglary in the third degree in violation of C.G.S. § 53a-103 the prosecution must prove the following:

A man is arguing with his girlfriend. She refuses to take his phone calls. The man decides to go to her home and look for her because he is suspicious that she is cheating on him and wants to exact revenge. He breaks into her home and makes a mess inside breaking some household items. The man leaves without taking anything. The man could be arrested for C.G.S. § 53a-103 burglary in the third degree because he unlawfully entered the woman's home with the intent to commit a crime inside. This offense would be treated as a domestic violence offense due to the relationship between the parties.

A group of teens decides to break into a vacant house to have a party. They find an open window and enter the home and have a party inside. They do not damage any property inside the dwelling. While the teens could be convicted of some form of criminal trespass, they are not guilty of burglary in the third degree because they lacked any intention to commit a crime within the home.

A home improvement contractor is working on a home. When he sees a neighbor leave their home, he uses his ladder to climb through the rear second-story window of the neighbor's house. The man looks through the neighbor's home and searches through dresser draws but does not find anything of value and leaves without taking anything. When the neighbor returns home, they notice that things are out of order, and they look at their home video system and call the police who arrest the contractor. The contractor could be convicted of burglary in the third degree because his intent to commit a crime in the home can be inferred by his behavior, which is proven by circumstantial evidence.

Defenses to Connecticut General Statutes C.G.S. § 53a-103 – Burglary in the Third Degree Burglary allegations are serious offenses. Often the police slap a burglary charge on a case that warrants trespassing. Burglary, trespassing, and the more severe crime of home invasion all share the unlawful entry into a building as a common element. What separates burglary from trespassing is the intention to commit a crime within the building. Since the proof of a mental intent is often an onerous burden for the state to prove, this is usually a useful aspect of the case to defend.

In many cases, it is possible to negotiate a plea bargain down to the less serious crime of trespassing. An experienced Connecticut criminal defense attorney can work with the state's attorney to demonstrate that in your case, you lacked the intent to commit a crime, and thus your felony burglary allegation should be prosecuted as a misdemeanor trespassing charge.

While the accelerated rehabilitation program can be used for burglary in the third-degree allegations, since this is a serious allegation, the use of such a program must be carefully planned. In most instances, state's attorneys will object to applications for the AR program for burglary charges, and judges will think carefully before granting them. You should carefully review your options with an experienced Connecticut criminal defense lawyer.

Criminal Defense for Burglary in the Third Degree

If you have been arrested for burglary in the third degree in violation of C.G.S. § 53a-103, you should immediately contact an experienced Connecticut criminal attorney. Stamford criminal lawyer Allan F. Friedman has over 25 years of experience defending burglary allegations. Attorney Friedman is determined to fight on your behalf to obtain the best possible result.

For more information about defending burglary in the third-degree allegations in violation of C.G.S. § 53a-103, contact Stamford criminal lawyer Allan F. Friedman at The Law Offices of Allan F. Friedman to arrange a free, no-obligation, initial consultation. Our offices are located at 24 Hoyt St #A, Stamford, CT 06905. Mr. Friedman can be reached 24/7 at (203) 357-5555, or you can contact us online for a prompt response.