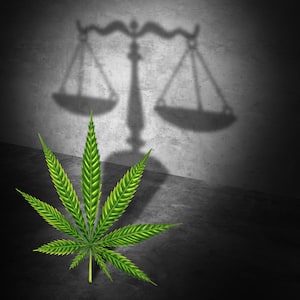 Marijuana is illegal in Connecticut. A lot of clients who get tickets for the simple possession of marijuana in violation of C.G.S.§ 21a-279a think it is not a serious matter. NEVER plead guilty to the simple possession of less than one-half ounce of marijuana, which is a violation. A plea to this offense will remain on your record for 7 years and many employers will refuse to hire you as a consequence. Although merely paying the fine and mailing in the ticket may seem like the easy way out, it may have significant long-term consequences on financial, employment and housing background checks. In most cases working with a Connecticut drug lawyer will result in having the charge dropped, reduced, or in the worst-case scenario using a drug education program to have the charge dismissed. So, before you plead guilty and mail in that ticket, be sure to contact a Stamford marijuana possession defense lawyer to review all your defense options and the consequences of pleading guilty.

The Associated Infraction of Possession of Drug Paraphernalia in Violation of C.G.S. § 21a-267(d)

The best Connecticut criminal defense attorneys would agree that you should never plead guilty to a 21a-279a possession of marijuana infraction ticket. The long-term consequences on your future opportunities and prospects are just too uncertain to calculate. Upon mailing in this 'ticket" your plea of guilty will be reported to the centralized infraction bureau in Hartford and the DMV and will become a permanent record. As a result, any potential employer or governmental agency conducting a criminal background check will be provided with the information that you had plead guilty to possession of marijuana and likely draw an adverse inference. Also, potential landlords who are looking into your background will come across this information as well as insurance companies who may significantly raise your automobile insurance rates as a result or decline to issue you a policy. For those who may later consider pursuing a career in the financial industry where licensing or bonding is a requirement, a record of a guilty plea to this infraction may spell a death sentence to your career aspirations. Before pleading guilty and mailing in one of these tickets, call an experienced Stamford criminal defense attorney for a free initial consultation, and we will review all of your options.

For those under the age of 21 pleading guilty to simple possession of marijuana will trigger and an automatic mandatory 60-day suspension of your driver's license . This further punishment will leave you with an additional mark on your driving record that will also affect your future employment prospects. You would be disqualified from working in many occupations in which you need to drive. Your auto insurance rates will go up substantially over the coming years as a result of having a record for operation under suspension. NO ONE under the age of 21 should EVER mail in a 21a-279a ticket under any circumstances.

What Can a Criminal Defense Lawyer Do to Fight Your 21a-279a Possession of Marijuana Infraction Ticket?

In some instances, hasty police work can lead to illegal search and seizures in violation of your Constitutional rights. In the event that police jump the gun and invade your Constitutionally protected privacy rights without following the proper procedures, it may be possible to have the evidence suppressed, which would lead to a dismissal of the charges against you.

In many other cases, we have represented individuals who were riding in one car with a group of others in which police found some marijuana. When no one wants to claim responsibility for the marijuana very often the police will charge everyone in the vehicle with possession of marijuana. This is called "constructive possession." Often the police are alleging that 2 or 3 people in a vehicle were all the ones who had a small amount of marijuana. In these scenarios, we can often fight the charges are obtain a dismissal on the basis that there is no evidence that you possessed any marijuana.

Luckily, most state's attorneys realize that this rather insignificant infraction can have a severe and lasting impact on a young person's life, so they are usually willing to listen to arguments of mitigation and work with defense counsel to reach a resolution of the charges that do not involve a guilty plea to either of these red-letter infractions. These negotiations often result in alternative resolutions such as community service or a charitable contribution.

So, you mailed in your ticket for 21a-279a possession of less than one-half ounce of marijuana, and now you wish that you hadn't. Either you were just denied a job, or perhaps you heard of a friend who was denied a job due to a record of a guilty plea to 21a-279s, and now you did some internet research, and you want to have your guilty plea vacated. Can it be done? Yes, depending on the circumstances. First is that it is much easier to have a guilty plea vacated within 4 (four) months of the original date that you plead guilty. After four months, it becomes more complicated. The goal is to have the guilty plea vacated, and then the court will restore the case on the docket where we can use the defense methods and strategies which I have discussed above to work to get the charge dismissed.

Although these are relatively minor infraction level offenses, a guilty plea can have significant lifelong consequences. In every case, we can get you a better result than if you mail in that ticket and pay the fine. In most cases, we can get the charges dismissed even if that means using a drug education program to do so. So, before you take any action on your ticket for simple possession of marijuana in violation of 21a-279a or 21a-267(d) you should immediately contact the Stamford marijuana defense lawyers at the Law Offices of Allan F. Friedman. We always offer a free initial consultation. We have over 25 years of experience defending drug crimes throughout the State of Connecticut.

Our rates are reasonable, and we offer payment plans as needed. Call Attorney Friedman at (203) 357-5555 to schedule your free initial consultation. We are available 24/7. Or you can contact us via our online form for a prompt response.