C.G.S. § 53a-217 – Criminal Possession of a Firearm, Ammunition or an Electronic Defense Weapon 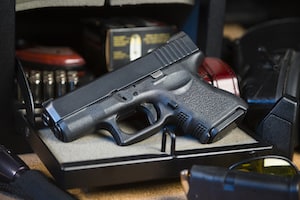 It is essential to understand that the Connecticut Supreme Court has ruled that under Connecticut law, BB guns capable of firing a projectile are "firearms" even though they operate on compressed air and not gunpowder. Accordingly, convicted felons and others barred from owning firearms should not own or possess BB or pellet guns.

It is also a violation of federal law for a felon to possess firearms, and in some situations, offenders may face prosecution by the United States.

For the state's attorney to convict you of a violation of C.G.S. § 53a-217 the prosecutor must be able to prove the following elements of this crime:

Other Categories of Individuals Prohibited from Possessing Firearms

Police are called to a home to investigate a domestic violence incident. When they arrive, they are told by the alleged victim that her boyfriend threatened her. When the officers investigate, they see a shotgun in the man's apartment. The man has a prior felony conviction for larceny. The man could be charged with criminal possession of a firearm in violation of C.G.S. § 53a-217. The fact that the man had previously legally purchased the shotgun would not be a defense to this crime.

The police pull over a man for speeding, and when they approach the car, they detect the strong odor of marijuana. They ask the driver to step out of the car and search the vehicle for weapons. In the trunk, they find a loaded rifle. The drive has a prior felony conviction for the operation of a drug factory. The man could be convicted for criminal possession of a firearm in violation of C.G.S. § 53a-217. The man could also be charged for possession of weapons in a vehicle in violation of § 29-38 because the weapon was not being properly transported.

An arrest is only an allegation that a crime occurred. An arrest means that there is probable cause to believe that a crime has occurred. A conviction requires a much higher standard of proof beyond a reasonable doubt. Attorney Friedman is dedicated to defending your rights zealously. If you are charged with criminal possession of a weapon in violation of C.G.S. § 53a-217 you need to take the allegation very seriously due to the mandatory minimum two-year jail sentence which a conviction requires.

Sometimes police don't observe the constitutional rights of suspects they are investigating. Often, they are tempted to violate our client's constitutional rights against illegal searches and seizures in violation of the Fourth Amendment. If the police discover a firearm while conducting an unlawful search and seizure, your defense lawyer can file a motion to suppress the evidence which has been illegally obtained. Without evidence, the state will have to drop the charges.

In many situations, the police encounter a group of people in a home or vehicle and can't determine who has actual possession of a firearm. The theory of constructive possession is often used to create a legal fiction that the accused possessed the firearm even if it was not in their physical possession at the time of the arrest. Since this statute requires that the accused possessed a firearm, a common defense strategy is to refute claims of constructive possession.

If you are facing an allegation of criminal possession of a weapon in violation of C.G.S. § 53a-217 and have not been previously convicted of a crime, using a diversionary program might be one way to get the charges dismissed. The accelerated rehabilitation program is the only diversionary program that could apply to this offense. It would require defense counsel to demonstrate "good cause" as to why the court should grant it. If you complete the program's requirements, the charges against you would be dismissed, and you would not have any criminal record.

A conviction for Connecticut General Statutes § 53a-217 - Criminal possession of a firearm is a Class C felony punishable by up to 10 years in jail, two years of which is a mandatory minimum sentence which may not be suspended or reduced by the court, and a fine of up to $10,000.

If you or a family member has been charged with criminal possession of a firearm in violation of C.G.S. § 53a-217, it is essential that you speak with an experienced Connecticut criminal defense attorney as soon as possible. Allan F. Friedman has successfully defended dozens of weapons cases over more than 25 years. You need a relentless and staunch advocate to search for every viable alternative to avoid these harsh penalties.

To arrange a free, no-obligation, initial consultation, contact Stamford criminal lawyer Allan F. Friedman . Mr. Friedman can be reached 24/7 at (203) 357-5555, or you can contact us online for a prompt response.