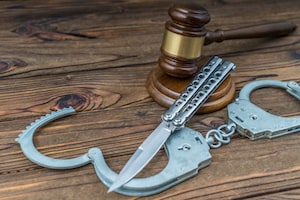 Everyone is aware that the Second Amendment established our right to keep and bear arms. The Supreme Court has determined that the state can establish reasonable limitations on our access to weapons. In Connecticut, there are many statutory restrictions on weapons and guns, and one of them is codified in C.G.S. § 53-206, which makes it illegal to carry certain weapons on your person. While it would be legal to have these weapons in your home or office, C.G.S. § 53-206 makes it unlawful to carry these weapons on your person.

For the state to prove you are guilty of violating C.G.S. § 53-206, the prosecutor must be able to demonstrate the following elements of this crime:

This statute has many exceptions that allow specific individuals to possess weapons upon their person. They include, for example, peace officers, who are allowed to carry dangerous weapons. Security guards are permitted to carry nightsticks. Martial arts students can carry martial arts weapons at competitions and classes and transport the weapons to and from such events. BB guns may be carried upon your own property or upon the property of another person who has authorized you to do so. Knives with blades greater than 4" can be legally carried under many exemptions. You should carefully read the statute before carrying any knife longer than 4" to see if you fall within one of the statutory exceptions or consult with a Connecticut criminal defense lawyer.

Police detain a man for a criminal investigation, and the police officer discovers that the man has a large knife on his person with a blade over 4" in his waist band. The man can be convicted for carrying a dangerous weapon in violation of C.G.S. § 53-206.

The woman is caught carrying a stun gun in her handbag that she uses for self-defense. Since stun guns are expressly listed as dangerous weapons in C.G.S. § 53-206, her carrying of this stun gun is illegal.

This is a strict liability offense, and this means that the state does not have to prove that you have an intent to possess the weapon.

The state only has to prove that you possessed the weapon. If your use of the weapon is listed in one of the exemptions to the statute or if you have a permit to carry the weapon, then you can not be found guilty of this offense.

Usually, the main issue in defense of these types of allegations is the circumstances under which the officer discovered the weapons. Where officers lacked probable cause or conducted illegal searches without a warrant, it may be possible to file a motion to suppress the evidence and have the case dismissed.

A conviction for Connecticut General Statutes § 53-206 – Carrying of dangerous weapons is a Class E felony punishable by up to 3 years in jail and a fine of up to $500. Anyone charged with this crime should take the matter seriously as felony allegations have serious consequences.

If you or a family member has been charged with carrying a dangerous weapon in violation of C.G.S. § 53-206, it is important that you speak with an experienced Stamford criminal defense attorney as soon as possible. Allan F. Friedman has successfully defended dozens of carrying dangerous weapons cases over more than 25 years. You need a relentless and staunch advocate to search for every possible alternative to avoid these harsh penalties.

For more information about defending carrying dangerous weapon charges in violation of C.G.S. § 53-206, and to arrange a free, no-obligation, initial consultation, contact Stamford criminal lawyer Allan F. Friedman at The Law Offices of Allan F. Friedman located at 24 Hoyt St #A, Stamford, CT 06905. Mr. Friedman can be reached 24/7 at (203) 357-5555, or you can contact us online for a prompt response.