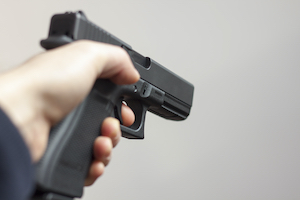 Connecticut General Statutes § 53-203 makes it illegal to intentionally or carelessly discharge a firearm in a manner likely to cause bodily injury or death to a person or domestic animal. Every year in Connecticut, people discharge firearms in crowded towns and cities where it is possible that the bullet fired could wind up injuring someone. This law was enacted criminalize such actions that create a probability of injury or death to others. This statue does not criminalize responsible target practice on a firing range or hunting wild animals during hunting season

Elements of the Crime Which Must be Proven by The Prosecutor

For the state to prove you are guilty of violating C.G.S. § 53-202, the state's attorney must establish the following elements of the crime:

On the 4th of July, a man shoots off his lawfully registered handgun into the air in the Town of Norwalk to celebrate the fireworks. No one is injured, and no property is damaged. The man could be prosecuted for unlawful discharge of a firearm in violation of C.G.S. § 53-203 because the discharge of a firearm within the confines of a crowded town is likely to cause bodily injury or death.

A man buys a new handgun and wants to test it. He sets up a target range in his backyard in the City of Stamford. He fires five test rounds at the target. One of the shots ricochets off the backstop and lands in a nearby sports field where children are playing. The man could be convicted of a violation of Connecticut General Statutes § 53-203 for shooting in a manner likely to cause bodily injury or death. Also, the man could be charged with C.G.S. § 53a-63 reckless endangerment and C.G.S. § 53-21 risk of injury to a minor.

A man is out in the woods, far away from anyone. He wants to sight in his rifle scope and sets up a location with a mound of earth to form a natural backstop. The man carefully makes sure that no one else is in the area. He discharges about 20 rounds at a target. The man could not be convicted of a violation of Connecticut General Statutes § 53-203 because his discharge of the firearm was not in a manner likely to cause bodily injury or death or any damage to property.

If someone is using a weapon in self-defense and the use of deadly force would be legally justified, then a defendant would have a valid defense against a charge against the unlawful discharge of a firearm.

The firing of the weapon needs to manifest a likelihood to cause bodily injury or death to a person or domestic animal or the wanton destruction of property. Firing a gun safely in the middle of the woods is not likely to cause death or injury.

Anyone who is charged with this offense who has no prior criminal history may be eligible to use the accelerated rehabilitation program. The AR program could result in the dismissal of the charges against you without the need to plead guilty. You should review your defense alternatives with an experienced Connecticut criminal defense lawyer.

A conviction for Connecticut General Statutes § 53-203 - unlawful discharge of firearms is a Class C misdemeanor punishable by up to 90 days in jail and a fine of up to $500.

If you have been arrested for unlawful discharge of a firearm in violation of C.G.S. § 53-203, it is essential that you speak with an experienced Stamford criminal lawyer immediately. Allan F. Friedman has successfully defended dozens of unlawful discharge of firearm cases over more than 25 years. You need a tenacious and determined advocate to search for every possible alternative to obtain the most favorable outcome possible.

For more information about defending unlawful discharge of firearm allegations in violation of C.G.S. § 53-202, and to arrange a free, no-obligation, initial consultation, and case action plan, contact Stamford criminal lawyer Allan F. Friedman at The Law Offices of Allan F. Friedman located at 24 Hoyt St #A, Stamford, CT 06905. Mr. Friedman can be reached 24/7 at (203) 357-5555, or you can contact us online for a prompt response.