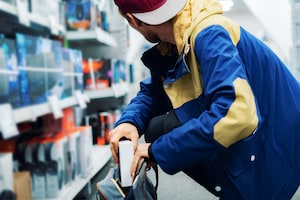 Elements of the Offense Which must be Proven by The Prosecution:

To be convicted of larceny in the fifth degree for shoplifting under General Statutes § 53a-125a, the prosecutor has the burden to establish the following elements of the crime:

With the intent to take the property of another, the defendant committed one of the following acts:

The retail value of the merchandise or goods determines the degree of larceny you are charged with. For larceny in the fifth degree Connecticut General Statutes § 53a-125a, the amount of the items alleged to have been stolen has to be between $500 and $1,000.

B. Other Forms of Larceny

The defendant acted intentionally to

A woman enters a clothing store and selects several shirts and a sweater. The total retail value of the items was $649. The woman takes the items to a changing room, and them puts them on underneath her coat. Loss prevention is watching her activities on video surveillance equipment and notices that the woman entered the changing room with the clothing items but did not exit with the items. The woman does not leave the store but is detained by loss prevention officers as she is passing points of sale heading towards an exit. Pursuant to C.G.S. § 53a-119(9) intentionally concealing unpaid goods or merchandise is a prima facie presumption that the goods were converted with the intention to take them without paying. The woman could be convicted of larceny in the fifth degree in violation of Connecticut General Statutes § 53a-125a because the value of the property she concealed was between $500 and $1,000.

A man finds a check on the sidewalk payable to someone in the amount of $750. The man forges the name of the payee and then makes the check payable to himself and deposits it into his account. The man could be convicted of larceny in the fifth degree in violation of Connecticut General Statutes § 53a-125a because the value of the amount of funds he misappropriated was between $500 and $1,000. Also, the man could be charged with forgery in the second degree in violation of C.G.S. § 53a-139.

If you are a first-time offender charged with larceny in the fifth degree in some circumstances, an experienced Connecticut criminal lawyer could arrange to resolve your charges through the performance of community service hours or a charitable contribution in exchange for the state dropping the charges. This is always the preferred resolution of larceny allegations.

Since larceny requires proof of an intentional act, therefore someone who makes an oversight or error could not be convicted of larceny. The sincere and reasonable belief of the accused that the property in question belongs to them similarly would negate the intent required for a larceny conviction.

Many offenders who are accused of larceny in the fifth degree may be eligible for diversionary programs such as the accelerated rehabilitation program, which can lead to a dismissal of the charges. Diversionary programs are often a reasonable solution for many offenders to resolve their criminal cases without having to make any admission of guilt.

Larceny in the fifth degree is a class B misdemeanor which could expose you to up to six months in jail and a fine of $1,000. Anyone with two or more prior larceny convictions could be subject to a possible sentencing enhancement as a persistent larceny offender which is a Class D felony.

If you are a loved one who has been charged with larceny in the fifth degree, you would speak with an experienced Connecticut criminal defense attorney. Please contact Attorney Friedman at (203) 357-5555 to schedule your free initial consultation and case action plan! We are available 24/7 - 365 days a year. Or you can contact us online for a prompt response.