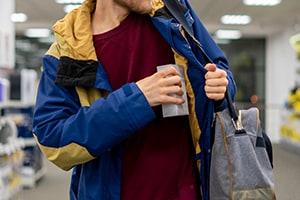 Under Connecticut law, the possession of any device designed or utilized to facilitate shoplifting by defeating anti-shoplifting or inventory control measures is illegal. Connecticut General Statutes § 53a-127f makes it illegal to possesses such devices under circumstances manifesting an intent to use the device for shoplifting.

Most arrests for possession of a shoplifting device occur during a shoplifting arrest. Still, there are instances where people have been arrested for mere possession of devices that were obviously intended to facilitate shoplifting were these individuals had no legitimate reason to own the device. An example of such a device is electronic, magnetic equipment to remove anti-theft tags from clothing.

To prove that the accused is guilty of possession a shoplifting device under Connecticut General Statutes § 53a-127f, the prosecutor must prove the following elements of the crime:

A man is caught exiting a store with unpaid merchandise that contained electronic security tags. To prevent the security tags from activating the alarms when he exited the store, the man employed a specially made "booster bag," which uses thick metallic material to shield the security tags. Since the man had passed all points of sale with the merchandise, he was arrested and charged with both larceny in the 6th degree in violation of Connecticut General Statutes § 53a-125b and possession of a shoplifting device in violation of Connecticut General Statutes § 53a-127f. The man could be convicted as the "booster bag" was a device designed to facilitate shoplifting, and he possessed the bag under circumstances manifesting an intent to use the device to shoplift.

A woman is pulled over for a motor vehicle stop, and the police officer smells the odor of marijuana and sees a bag of marijuana in the center console. When searching the vehicle, the officer finds a device designed to remove anti-theft security tags from clothes. Upon investigation, the officer finds surveillance tapes, which showed that the woman was staking out retail stores in the area a short time before she was pulled over. The woman had no legitimate reason to possess the device. The woman could be convicted for possession of a shoplifting device in violation of Connecticut General Statutes § 53a-127f because she possessed the device under circumstances which manifested an intent to use the device to shoplift.

It is not illegal to possess a device that could be used to facilitate shoplifting. The state must prove that the device was designed or adapted to counteract inventory control devices. Also, the state has to prove that the possession took place under circumstances which demonstrated an intent to shoplift. In many situations, police try to use this statute to charge shoplifters for possession of simple items that have no connection to counteracting inventory control devices. If you have been charged with this offense, you should contact a Stamford shoplifting lawyer to go over the facts of your case to determine the best defense strategy to fight the allegations against you.

If you have no prior criminal convictions, you may want to explore the possibility of using a diversionary program for first-time offenders to get your possession of a shoplifting device charge dismissed. One such program is the accelerated rehabilitation program.

The penalty for a violation of Connecticut General Statutes Section § 53a-127f, possession of a shoplifting device is a Class A misdemeanor for which you can face up to one year in jail and a fine of up to $2,000.

Criminal Defense for Possession of a Shoplifting Device

Possession of a shoplifting device is an A misdemeanor. As a result, you should contact an experienced Stamford shoplifting lawyer if you or a loved one has been accused of possession of a shoplifting device. Stamford criminal attorney Allan F. Friedman has over 25 years of experience fighting shoplifting allegations and other criminal charges related to larceny. Attorney Friedman will work hard to defend you against these allegations, try to have them dismissed, or significantly reduce the consequences.

For more information about defending shoplifting allegations, contact Stamford criminal lawyer Allan F. Friedman at The Law Offices of Allan F. Friedman to arrange your free, no-obligation, initial consultation. Our offices are located at 24 Hoyt St #A, Stamford, CT 06905. Mr. Friedman can be reached 24/7 at (203) 357-5555, or you can contact us online for a prompt response.