C.G.S. § 29-35 – Carrying of Pistol or Revolver Without Permit Prohibited 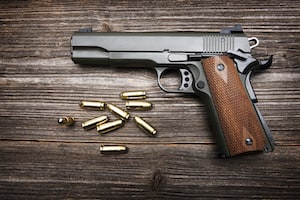 Our nation was founded on many principles, including the Second Amendment, which established our right to bear arms. Our office firmly supports our client's legal right to self-defense. In a series of seminal Supreme Court decisions, the Court has gradually allowed state and local governments to impose reasonable restrictions on civilian's access to firearms. In Connecticut, there are numerous statutory restrictions on weapons, and one of them is codified in C.G.S. § 29-35, which makes it illegal to carry a handgun on your person without a permit. While it would be permissible to possess a pistol or a revolver in your home or place of business, C.G.S. § 29-35 makes it unlawful to carry a handgun on your person.

For the state's attorney to convict you of a violation of C.G.S. § 29-35 the prosecutor must be able to prove the following elements of this crime:

This weapons law provides several statutory exceptions that allow specific individuals to possess handguns on their person. These exceptions include, for example, peace and parole officers and members of the armed forces.

Handguns can be lawfully transported in vehicles by individuals who do not have a permit to carry a pistol or a revolver if they follow the statutory requirements carefully.

Anyone purchasing a pistol or revolver can transport it in the original packaging in which it was wrapped at the time of sale to the purchaser's place of business or home.

Individuals moving their household goods from one place to another may transport their handguns with them while they are moving, provided the weapons are properly transported.

Individuals can transport handguns to and from a gun store to have the weapons repaired.

Police pull a man over during a traffic stop for speeding. The officers detect the odor of marijuana and ask the man to step out of the vehicle where they find a pistol on his person. Since the man has no permit to carry a handgun, he could be convicted of a violation of C.G.S. § 29-35 carrying a handgun without a permit and a violation of C.G.S § 29-28 possession of weapons in a motor vehicle. The fact that the man legally purchased the handgun would not be a defense to this crime.

An arrest is an allegation and everyone is presumed innocent unless the state has enough evidence to establish their guilt at a trial. Our office will zealously fight to defend your rights. If you have been alleged to have possessed a handgun without a permit you need to take the matter very seriously. This offense carries a potential mandatory minimum one year in jail which can only be reduced if a judge expressly finds mitigating circumstances.

In many instances, over-zealous police officers obtain evidence in violation of citizens' constitutional rights against illegal searches and seizures in violation of the Fourth Amendment. If a handgun is found while police are conducting an unlawful search, it may be possible to file a motion to suppress the weapon's introduction as evidence. Search, and seizure law under the Connecticut Constitution is something that you should review carefully with an experienced criminal defense attorney.

All too often, police can not determine who is in possession of a handgun when they encounter a group of individuals. In some situations, they will use the theory of constructive possession to establish that the accused exercised dominion and control over the weapon even if it was not actually in their physical possession at the time of the arrest. Since this statute requires that the accused possessed a handgun upon their person, a common defense strategy is to refute claims of constructive possession.

A good defense attorney will work to establish mitigating factors when the state has a solid case of possession of a handgun without a permit. Only the court has the authority to reduce the mandatory minimum one-year jail sentence that a conviction for this offense carries. Our office will leave no stone unturned to build the most persuasive possible mitigation argument to avoid mandatory jail time for our clients.

If you are facing an allegation of carrying a handgun without a permit in violation of C.G.S. § 29-35 and have no prior record of a criminal conviction, a diversionary program might be a effective way to get the charges dismissed. Diversionary programs such as the accelerated rehabilitation program are not an admission of guilt. Successful completion of the program requirements will lead to a dismissal of the charges. It would be best if you discussed the possibility of using a diversionary program with an experienced Connecticut criminal defense attorney.

A conviction for Connecticut General Statutes § 29-35 - Carrying a handgun without a permit is a Class D felony punishable by up to 5 years in jail and a fine of up to $5,000. This offense is punished very severely as a conviction also requires a mandatory minimum one-year in prison absent a finding by a judge of mitigating circumstances.

If you or a family member has been charged with carrying a handgun without a permit in violation of C.G.S. § 29-35, it is essential that you speak with an experienced Stamford criminal defense attorney as soon as possible. Allan F. Friedman has successfully defended dozens of weapons cases over more than 30 years. You need a relentless and staunch advocate to search for every viable alternative to avoid these harsh penalties.

To arrange a free, no-obligation, initial consultation, contact Stamford criminal lawyer Allan F. Friedman. Mr. Friedman can be reached 24/7 at (203) 357-5555, or you can contact us online for a prompt response.