Norwalk - Possession with Intent to Sell

Norwalk Possession of Drugs with Intent to Sell Defense Attorney 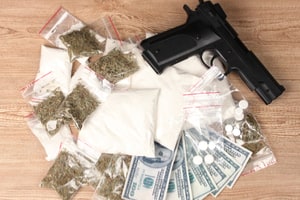 Many Norwalk criminal defense lawyers who regularly defend drug crime allegations would agree that Police very frequently will up-charge and add a charge of “possession with intent to sell” in situations where it is clear that thee accused had no intention or plan to sell any drugs. In many of these situations the accused was often apprehended with a very small quantity of drugs – either marijuana or narcotics but the Police will infer an “intention to sell” from the manner in which the drugs were packaged. In other situations the possession of a scale or plastic bags or other re-packaging materials gives the Police the basis upon which to allege that the drugs were possessed with the “intention to sell” or that the user was operating a “drug factory.”

Although the Police are often adding these charges in situations in which the nexus to any bona fide intention to sell drugs is highly questionable the fact remains that these are very serious felony charges and that is precisely why the Police love to use these statutes whenever they can to enhance the severity of a simple drug possession arrest. If you have been charged with possession with intent to sell or operation of a drug factory, even if it seems like a very minor case because you only had a small amount of drugs, you are facing serious felony allegations and you should get in touch with an experienced Norwalk criminal defense attorney as soon as possible.

Of course these Police tactics of liberally up-charging the allegation of possession with intent to sell in minor drug possession cases are in direct contradiction to the State Legislature’s efforts to lessen the penalties for the mere possession of drugs. Our State’s Legislature’s objective in lowering the penalties for simple possession of drugs was to divert people with drug dependency issues out of the Court system and jail and instead focus on treatment which is vastly more effective and less costly to address drug addiction. By up-charging low level drug offenders who are apprehended in the possession of small quantities of drugs with the charge of possession with intent to sell the Police are basically defying the Legislature’s efforts to change the policy on how we deal with drug users. By adding the charge of possession with intent to sell the Police turn what would have been a minor misdemeanor or non-criminal possession charge into a much more severe felony case. However, many of these cases are very weak and unfounded. Just because the Police have charged you with possession with intent to sell does not mean that that allegation is going to stick. Keep in mind every case is unique and depends upon the facts of how the drugs were packaged, where they were stored and all the other circumstances of your arrest. Call an experienced Norwalk criminal defense attorney today to go over the details of your case and start building a defense to your case today.

Norwalk criminal defense attorneys will agree that possession with intent to sell narcotics and hallucinogenic substances is codified in Connecticut General Statutes Section 21a-277(a). Many clients are under the misconception that in order to have been charged with possession with intent to sell narcotics they must have been caught actually attempting to sell drugs. The statute itself does make it illegal to sell, manufacture, distribute, dispense or transport any quantity of narcotics, or hallucinogens other than marijuana with the intention to sell them. However, the statute goes further and broadens the scope to include the possession of any quantity (no matter how small) of drugs under circumstances indicating that you either were transporting or possessing the drugs with an intention to sell them. There are various situations under which you could be convicted of possession of intent to sell. The most obvious is situations in which you are caught actually attempting to engage in the sale of narcotics. Another common scenario is where the sheer quantity of the drugs that you were in possession of was so significant that the inference can be drawn that they were not just for your personal use but rather for distribution or sale. Another common situation is where you are apprehended with drugs that are packaged in a manner consistent with street sales. Finally, if you are caught with drugs and also scales, packaging materials and other drug paraphernalia commonly utilized by drug dealers to process and package drugs for retail sale this could provide evidence that you had an intention to sell the drugs and justify the charge of possession with intention to sell.

A conviction of Connecticut General Statutes Section 21a-277(a) is a serious felony crime and carries a penalty of up to 15 years in jail and a $50,000 fine plus you can face many years of probation. This crime can have a major impact upon your reputation, your ability to secure employment and effect you for the rest of your life. It is very important if you are under investigation for this crime or have been contacted by Police do not answer any questions without first speaking with an experienced Norwalk criminal defense attorney. If you have been arrested for this offense you should immediately contact drug crimes lawyer serving Norwalk to review your defense options.

Connecticut General Statutes Section 21a-277(b) is frequently used by Police to target those who are in possession of marijuana. The statute also covers other controlled substances which are not a hallucinogenic substance or a narcotic. Although the maximum possible penalty is significantly lower than that for subsection 21a-277(a) described above it is still a felony charge and you can face up to 7 years of jail and a fine of up to $25,000. What is really disturbing about the Police use of this statute is that through the decriminalization of marijuana in 2011 at this point many marijuana possession situations would otherwise be either a non-criminal infraction or a misdemeanor level possession charge. By twisting the facts and trying to paint a picture that may or may not be accurate the Police often are charging people caught with the possession of small amounts of marijuana with the felony charge of possession with intent to sell which is obviously a significantly more serious case.

Our Connecticut statutes on drug possession are vastly complicated and in order to properly develop a defense strategy for your case it requires an in depth review of all of the factual details of your individual case. Since this is a statute which is particularly subject to abuse and over charging by the Police in situations where there is not much proof of any evidence of an “intention to sell” every case requires an in depth analysis of all of the facts. Obviously the local Police departments are not pleased with our Legislature’s efforts to lower the penalties for simple possession of drugs. It seems as if the Police want to keep using the felony level crimes of possession with intent to sell and operation of drug factory whenever and as frequently as they possibly can charge them. The positive news is that often State’s Attorneys can be persuaded to lower the charges and allow you to participate in a drug education program which can lead to a dismissal of all the charges against you and avoid having any criminal record. Also, for those who have no criminal record the accelerated rehabilitation program can be utilized to have possession with intent to sell charges dismissed.

The top Norwalk criminal defense lawyers would agree that every possession with intent to sell case is different and careful analysis of the facts of each case is imperative to being able to develop the most effective defense strategy. Obviously with the serious penalties that you face with a possession with intent to sell charge you have to take these kinds of allegations very seriously.

Let Us Fight Your Possession with Intent to Sell Case!

If you have been charged with a drug offense in Fairfield County, Attorney Allan F. Friedman will take the time to answer all of your questions and give you sound legal advice. Attorney Friedman will work hard to put together a winning defense strategy to defend you. He provides each of his clients with personal attention and clear communication, and his rates are reasonable and he offers payment plans. Norwalk drug crimes defense attorney Allan F. Friedman also represents people in Stamford, Darien, Weston, Greenwich, Bridgeport, Westport, Fairfield, Wilton, Cos Cob, New Canaan, and Easton among other Connecticut cities. Our office is conveniently located right off exit 13 on Richards Avenue in Norwalk. We also have an office located in downtown Stamford one block from the Stamford Courthouse at 24 Hoyt Street. Call us at (203) 357-5555 or contact us via our online form to schedule an appointment. Attorney Friedman also is available to assist you if you need a sex crimes lawyer or representation in fighting charges related to theft, drunk driving, assault, domestic violence, disorderly conduct, and many other crimes.