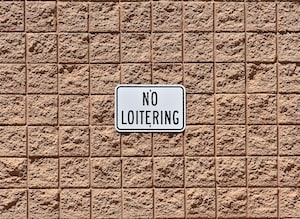 The Connecticut legislature has consistently acted to safeguard children by protecting school zones and schools as areas that need additional protection. One of the legislative enactments that reflect these concerns is Connecticut General Statutes § 53a-185, which criminalizes the loitering around school grounds without a legitimate purpose to be there.

To establish that the accused is guilty of loitering on school grounds in violation of Connecticut General Statutes § 53a-185, the state must be able to prove the following elements of the crime:

A man was in jail for several years. While he was in jail, the mother of his son terminated his parental rights. When the man is released from custody, he goes to visit his son as his school. The front desk advises the man to leave and calls the police. The man could be arrested for loitering on school grounds in violation of Connecticut General Statutes § 53a-185 because the man's parental rights were terminated. Therefore, he has no custody or responsibility to visit his son.

You can't be convicted on loitering on school grounds if you are a parent of a student or have custody of a student who attends the school. Similarly, you can't be convicted of this offense if you had a legitimate reason to be on the school grounds, such as being asked to pick up your friend's child after school or attending an afterschool PTA meeting.

The penalty for a violation of Connecticut General Statutes Section § 53a-185 loitering on school grounds is a class c misdemeanor punishable by up to three months in jail and a fine of up to $500.

Courts and state's attorneys take any offense that occurs on or near school grounds very seriously. If you or a loved one has been charged with loitering on school grounds, it is important that you speak with an experienced Connecticut criminal defense attorney. Stamford criminal lawyer Allan F. Friedman has over 25 years of experience defending loitering allegations.

For more information about defending loitering on school grounds allegations in violation of C.G.S. § 53a-185, contact Stamford criminal lawyer Allan F. Friedman at The Law Offices of Allan F. Friedman to arrange your free, no-obligation, initial consultation. Our offices are located at 24 Hoyt St #A, Stamford, CT 06905. Mr. Friedman can be reached 24/7 at (203) 357-5555, or you can contact us online for a prompt response.