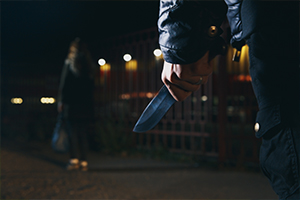 Robbery Can Occur by Force or by Threat

Pursuant to C.G.S § 53a-136 robbery in the third degree can occur when the actor either commits the larceny upon the victim by using physical force or by threatening or intimidating the victim with the immediate use of physical force. For example, is a man tells a victim to hand over his wallet or he is going to beat him up, that would be a robbery as the larceny was committed with the threat of imminent use of force.

A common situation where robbery in the third degree is charged in Connecticut is where a shoplifter snatches a product or bag out of the hands of a casher or employee of a store by force. Although these offenses are more akin to shoplifting, regrettable the forceable removal of merchandise can elevate the seriousness of these incidents to a robbery charge.

To be convicted of C.G.S. § 53a-133 robbery in the third degree, the state's attorney must be able to prove the following elements of the crime:

A woman is leaving the supermarket. As he is approaching her car, a man suddenly approaches and forcibly grabs the woman's handbag from her and pulls it away from her in a struggle. The man runs away with the handbag and is later apprehended by the police. The man could be charged with robbery in the third degree in violation of C.G.S. § 53a-133 because he used physical force to commit a larceny.

A man is walking home late at night when he is accosted by a group of three young men who demand that he turn over his cell phone and wallet of they are going to give him a beat down. The man turns over his cell phone and wallet to the group of men. The three young men could be charged with robbery in the third degree in violation of C.G.S. § 53a-133 because they used the threat of immediate physical force to commit a larceny.

Connecticut General Statutes § 53a-102 - Burglary in the Second Degree

Connecticut General Statutes § 53a-60 - Assault in the Second Degree

Defenses to Connecticut General Statutes C.G.S. § 53a-133 - Robbery in the Third Degree Claim of Right Defense

If the property the accused is attempting to obtain from another person legally belongs to them, then they could claim a defense of right to the property. This defense would negate the level of intent required to commit the larceny component of the robbery. For example, if someone takes something from you and you track them down and use force to recover your property, you could not be convicted for robbery. The state bears the burden to prove each element of the crime beyond a reasonable doubt. However, even if you could not be charged for robbery you could face charges for assault or burglary depending on the circumstances.

Shoddy police investigations flaw many robbery cases. Often police attempt to solve robberies by using photo arrays to the alleged victims, which can result in wrongful and false identification of suspects who had nothing to do with the offense. Our firm works closely with our investigative team, which includes former police detectives to review police line-up methods. A lot of people are falsely accused of robberies who just happened wrongfully identified by a crime victim in an unfair police identification procedure.

If you are a suspect in a robbery investigation, time is of the essence to start building your defense! It is essential to act promptly to retain a defense counsel so that motions to preserve evidence can be filed. Delay allows potential witnesses to disappear, evidence to be lost, exculpatory video evidence to be erased, and for people to forget crucial details. The state has a head start on criminal investigations, so it is imperative to begin building your defense today!

Contact Stamford criminal lawyer Allan F. Friedman to arrange your free, no-obligation, initial consultation. Mr. Friedman can be reached 24/7 at (203) 357-5555, or you can contact us online for a prompt response.