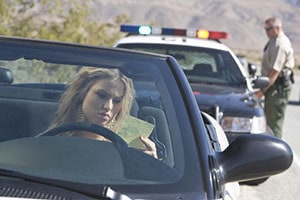 There are several different speeding laws in Connecticut. It is sometimes confusing to understand the difference between the various statutes related to speeding in Connecticut. Under Connecticut General Statutes § 14-218a, you can be charged with speeding even if you are operating under the posted speed limit if you were driving unreasonably fast for the conditions at the time. While this infraction is the least severe speeding infraction in Connecticut, a guilty plea can still result in increased insurance premiums. It can also result in the suspension of your driver's license if you have several tickets on your driving history.

When you receive a ticket for a violation of Connecticut General Statutes § 14-218a, it says on the back of the ticket that no points will be assessed if you pay the ticket online or mail it in, but this information is misleading. Although the Connecticut DMV may not access points against your license, they do put the conviction on your permanent driving record. If you get enough tickets, they will enforce an administrative sanction against your license, and you can wind up with a suspension. More importantly, the conviction will affect your insurance rates for the following three years.

Although it may seem like the easiest thing to do is pay the fine, the ticket will cost you hundreds of dollars in increased insurance rates for several years. We recommend that everyone plead not guilty and fight your ticket for Connecticut General Statutes § 14-218a. Of course, hiring an experienced Connecticut traffic ticket defense lawyer can help you obtain the most favorable possible. If you hire an attorney, you won't have to take a day off from work and appear at court.

To secure a conviction of unreasonable speed in violation of Connecticut General Statutes § 14-218a, a state's attorney must be able to prove that:

A man is commuting home on I-95 in rainy weather, and when the traffic slows down, he can't stop in time and rear-ends another vehicle. The man is issued a ticket for a violation of Connecticut General Statutes § 14-218a unreasonable speed by the responding officer. The man could be convicted of this violation if the state could prove that his rate of speed was unsafe and unreasonable, given the weather conditions then prevailing. The man could be convicted of traveling at an unreasonable speed under these circumstances even though he was driving under the posted speed limit of 55 mph at the time of the accident.

A woman is driving her car on a residential street in Greenwich that has a posted speed limit of 30 mph. A police officer is conducting a speed trap with a radar unit and clocks the woman at 41 mph in a 30 mph zone. The woman could be convicted for unreasonable speed in violation of Connecticut General Statutes § 14-218a.

Unreasonable speed where the accused is not exceeding the posted speed limit or in cases where there is no actual speed measurement by the police is always a highly subjective assumption on the part of the police officer who wrote the ticket. Often these kinds of tickets are given out after traffic accidents as part of the police investigation. If you have received a ticket after an accident, do not plead guilty. Contact our office so we can fight the ticket for you and save your license.

Other unreasonable speed or speeding tickets are issued when the motorist is clocked or measured at a rate of speed over the posted speed limit. Often the police make errors and give out tickets by mistake. Many clients report going along with the flow of traffic and unfairly being singled out.

Attorney Friedman was trained by the Connecticut State Police in radar and laser speeding enforcement and served as a certified intern state's attorney handling the entire motor vehicle docket at the Stamford court back in 1990. In the last three decades, Attorney Friedman has successfully had hundreds of speeding tickets dismissed.

If you choose you to hire an attorney to fight your speeding ticket, you will not have to appear at court. You don't have to take any time off from work. Attorney Friedman can take care of the entire process for you. Give him a call today for a free consultation and learn how we can get your ticket tossed out.

This offense is an infraction. The only penalty you face is a fine. The biggest problem is that any guilty plea either on-line or through the mail or after trial will be recorded on your permanent Connecticut DMV driving history. Having a conviction for a violation of Connecticut General Statutes § 14-218a on your driving history can significantly affect your insurance rates for years to come. If you collect enough moving violations, your license can be suspended as an administrative sanction by the Connecticut DMV.

Let Us Defend Your Speeding Ticket!

Speeding ticket infractions can affect your driver's license and cause your insurance rates to increase. You should not hesitate to contact Stamford traffic ticket lawyer Allan F. Friedman if you have been charged with speeding or a related offense. He can explore the events that resulted in the charge and investigate appropriate defenses. You will never have to appear in court. Call us for a free consultation at (203) 357-5555 or contact us via our online form.