Misconduct with a Motor Vehicle Generally 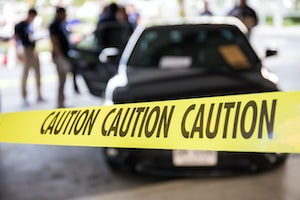 Criminal negligence is more extreme than civil negligence, and it requires that the actor disregarded the risk of harm that their actions could cause in a manner that constitutes a gross deviation from the standard of care of a reasonably prudent person.

Misconduct with a motor vehicle cases do not involve intoxicated drivers.

Where intoxication is a factor in an accident, the more severe crime of manslaughter in the second degree with a motor vehicle in violation of C.G.S. § 53-56b would apply. Misconduct with a motor vehicle generally involves situations where someone was driving dangerously and got into an accident that caused a death. You can't be convicted for this offense for making a simple mistake or for ordinary negligence. In many situations, local police will charge the crime of misconduct with a motor vehicle when someone has died in an accident. Just because the police can get an arrest warrant signed does not mean that there is sufficient proof to convict you at trial.

To be convicted of a violation of Connecticut General Statutes § 53a-57, the state has to prove the following elements of the crime:

A man is driving his car on I-95 at 103 mph when he tries to change lanes and loses control of his vehicle. He sideswipes another car and causes that car to run off the road and into a tree. A passenger in the other car dies in a resulting fire. The man could be convicted of a violation of Connecticut General Statutes § 53a-57 because his speed was so fast, he was criminally negligent in causing the accident.

A woman is driving to work. As she is driving, she is texting her boyfriend.

While she is distracted by text messaging, she swerves into the shoulder and runs over a man on his bicycle. The man dies as a result of the injures sustained in the accident. The woman could be convicted of misconduct with a motor vehicle in violation of Connecticut General Statutes § 53a-57 because texting while driving is criminally negligent.

Defenses to Misconduct with a Motor Vehicle

Just because the police charge you with misconduct with a motor vehicle does not mean that they have enough proof to convict you of this offense.

Invariably the defense of a misconduct of a motor vehicle case will involve the retention of an auto accident reconstruction expert to refute the state's claims. Often the police officers who investigate fatal accidents do not have significant credentials and experience in accident reconstruction. Often the police conclusions are based upon conjecture and assumptions that are easily disproven.

Misconduct with a motor vehicle in violation of C.G.S. § 53-57 is a class D felony for which you can face up to five years in jail and a fine of up to $5,000. Also, you will face a license suspension.

For questions about Connecticut General Statutes C.G.S. § 53-57 misconduct with a motor vehicle, or to discuss your case confidentially with Attorney Allan F. Friedman, do not hesitate to call us at    (203) 357-5555, or you can contact us online for a prompt response. We have offices conveniently located in Stamford and Norwalk.