C.G.S. § 21a-279– Penalty for Illegal Possession of a Controlled Substance

Possession of a Controlled Substance - Generally 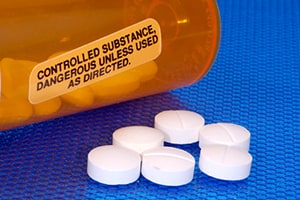 Some common controlled substances include:

To be convicted of possession of a controlled substance in violation of Connecticut General Statutes § 21a-279, the state's attorney has to prove the following elements of the crime:

1. The defendant possesses or has under his control any quantity of a controlled substance (except less than one-half ounce of marijuana)

A man was driving his car and pulled over for a traffic infraction because he has illegal window tints. The police officer notices that the man has a plastic bag of white powder in his center console. The officer field tests the powder, and it tests positive for cocaine. The man could be convicted for possession of a controlled substance in violation of Connecticut General Statutes § 21a-279.

A woman is invited to a party at a friend's house. About ten people are attending the party. While she is at the party, the police barge in and exercise a search warrant to search the premises for illegal drugs. The police discover a bag of marijuana located in the living room where the ten people who were attending the party were located. None of the individuals who were attending the party or the homeowner and host wants to claim ownership of the marijuana, so the police arrest everyone for possession of a controlled substance in violation of Connecticut General Statutes § 21a-279. The woman could not be convicted because, under these facts, the state could not prove that she had constructive possession of the marijuana. The woman was just a guest as a party and did not exercise any dominion or control over the premises.

Defenses to Possession of a Controlled Substance Charges

In many situations, people are charged with possession of a controlled substance who are in groups. When, for example, the drugs are found in a motor vehicle, it can be difficult for the state to prove that a passenger has constructive possession of the controlled substance. Similarly, when drugs are found in a home with multiple occupants, the issue of possession is often a vital issue in the case. You can not be convicted for possession of drugs that were present in a home that you were merely visiting. It is essential to review the specific facts of your case with a Connecticut drug crimes lawyer to determine the best defense alternatives for your situation.

The statute provides an exemption for anyone that is assisting someone or is themselves seeking medical attention related to an overdose for any intoxicating liquor or substance. You can not be prosecuted for possession of a controlled substance when you are seeking medical treatment for a drug overdose.

Our firm is committed to exploring drug treatment alternatives instead of criminal prosecution. The pretrial drug education and community service program is one such alternative diversionary program that would lead to the dismissal of controlled substance charges and no criminal record. We are determined to explore every possible alternative to have drug possession charges nolled or dismissed without having to participate in the drug education program because the program is costly and requires a significant investment of time and effort.

Courts are permitted to order substance abuse treatment programs for repeat offenders who have prior convictions. It is important to have an experienced advocate on your behalf to convince the court that you are drug dependent and should be eligible to enter a drug treatment program.

An experienced Connecticut drug crimes lawyer will usually be able to get a charge for possession of narcotics dropped or dismissed. It is essential to never plead guilty to a drug possession offense as a record for a conviction can have significant adverse consequences for your ability to seek employment and housing in the future.

Possession of a controlled substance in violation of C.G.S. § 21a-279 is a Class A misdemeanor, for which you could be sentenced up to one year in jail and ordered to pay a fine of up to $1,000.

Attorney Allan F. Friedman firmly believes that everyone is presumed innocent and has the right to a fair trial and effective defense. This is why we are determined to provide all our clients with five-star customer service and exceptional representation, even when faced with the most stressful and trying circumstances. If you have been arrested for possession of a controlled substance in violation of Connecticut General Statutes § 21a-279, contact our Stamford criminal law firm today at (203) 357-5555, or you can contact us online for a prompt response.