C.G.S. § 21a-257– Person Receiving Narcotic Drug to Keep it in Original Container 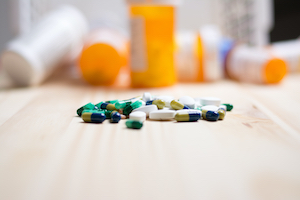 Many people break this statute unknowingly. The legislature in Connecticut has made it illegal to possess prescription narcotic drugs except in the original container in which it was dispensed. It does not matter if you have a valid prescription for the medication or that the medication was provided to you by a pharmacist, you must maintain all narcotic drugs in their original containers. Many people arrested for a violation of this statute think that they were not doing anything illegal.

Elements of the Crime Which Must be Proven by the Prosecutor

To be convicted of failure to keep narcotic medications in their original containers in violation of Connecticut General Statutes § 21a-257, the state's attorney has to prove the following elements of the crime:

A man is pulled over for a speeding infraction in his car. The investigating officer notices a few loose pills in the center console of the vehicle. The officer discovers that the pills are oxycodone. The man has a valid prescription for the medication and took a days' supply with him so he would not have to carry the entire bottle with him. Despite the fact that the man had a valid prescription for this medication, the man could be convicted for failure to keep a narcotic drug in its original container in violation of Connecticut General Statutes § 21a-257.

A man is trespassing on the grounds of a pubic housing project. When the police are taking him into custody, they find several pills in his pants pocket. All of the pills are prescription medication, but none of them are narcotics. The can could not be arrested under these facts for failure to keep a narcotic drug in its original container in violation of Connecticut General Statutes § 21a-257 because the medication was not a narcotic.

Defenses to Failure to Keep Medication in its Original Container

Possession is often an element of this offense that is contested. This is particularly the case when there are several co-defendants in a vehicle or home where the medication is found. Often the state has difficulty proving possession. The state usually operates under a theory of constructive possession. The best approach is to review the specific details of your arrest with a Connecticut criminal defense lawyer to determine the best defense strategy for your situation.

In many situations, we are able to convince the state's attorneys to drop these charges. Many people who are arrested for this offense are ill and suffering from significant medical conditions. In the past, we have had a lot of success utilizing medical documents to get these charges dropped even when keeping the pills out of their original container is technically a crime.

Connecticut General Statutes § 21a-257 - failure to keep medication in its original container is a Class A misdemeanor punishable by up to one year in jail and a fine of up to $2,000.

Attorney Allan F. Friedman firmly believes that everyone is presumed innocent and has the right to a fair trial and effective defense. This is why we are determined to provide all our clients with five-star customer service and exceptional representation, even when faced with the most stressful and trying circumstances. If you have been arrested for a drug possession crime, contact our Stamford criminal law firm today at (203) 357-5555, or you can contact us online for a prompt response.