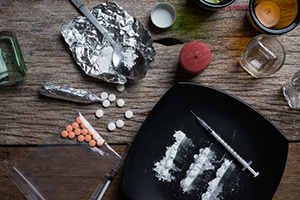 When clients imagine a drug crime, they usually think about crimes that involve the use or possession of illegal drugs. However, it is also unlawful to possess drug paraphernalia. Drug paraphernalia is broadly defined in Connecticut General Statutes § 21a-240(20) to include any equipment, product, material or item used, designed or intended for use in planting, cultivating, harvesting, manufacturing, processing, packaging, ingesting, inhaling or otherwise introducing controlled substances, marijuana or other illegal drugs into the body.

Some common examples of drug paraphernalia include rolling papers, pipes, plastic bags, scales, growing lights and equipment, packaging equipment, and materials for the storage of drugs.

Drug paraphernalia confiscated in connection with the simple possession of less than one-half ounce of marijuana, is charged as an infraction under C.G.S § 21a-267(d). Although this is a ticket that you can mail in or pay online, you should always plead not guilty. Any conviction for an infraction of drug paraphernalia will lodge on your permanent record with the centralized infractions bureau for seven years. A record for a drug offense, even an infraction can cause you significant problems securing employment for years to come.

Many people have contacted us over the last several years since Connecticut has lowered this to an infraction level offense who had been rejected from their dream job because they plead guilty to a drug paraphernalia infraction under Connecticut General Statutes § 21a-267(d).

In addition, anyone under the age of 21 years of old would face a 90 (ninety) day driver's license suspension if they plead guilty to a violation of C.G.S § 21a-267(d). This would result in a suspension going on your driving record and significantly increased insurance rates for years to come.

Of course, other levels of violations of C.G.S Sec. 21a-267 are misdemeanor level crimes.

To be convicted of possession of drug paraphernalia in violation of Connecticut General Statutes § 21a-267, the state's attorney has to prove the following elements of the crime:

A man is driving home one evening, and the police stop him for speeding. The investigating officer detects the strong odor of marijuana emanating from the vehicle. Upon further investigation, the police officer discovers the man has less than one half an ounce of marijuana and a marijuana pipe in his pants pocket. The officer takes possession of the marijuana and the pipe and issues the man a ticket for simple possession of marijuana in violation of Connecticut General Statutes § 21a-279a and drug paraphernalia in violation of C.G.S. § 21a-267(d).

A man, who is not a student, is caught in the grounds of a high school is smoking marijuana by a police officer patrolling the area. Upon searching the man, the officer discovers that the man has over one ounce of marijuana on his possession and drug paraphernalia consisting of rolling papers, plastic bags, and a pipe. The man could be charged with a violation of possession of drug paraphernalia in violation of Connecticut General Statutes § 21a-267(a). Because the arrest occurred within 1500' of a public school, and because the man is not a student, he would be subject to the sentencing enhancement of C.G.S. § 21a-267(c). He could face an additional mandatory minimum of one year in jail if he is convicted.

There are a variety of defenses that a skilled Connecticut criminal defense attorney can utilize to defend your possession of drug paraphernalia charges.

In many cases, the police will make arrests for drug paraphernalia and give the summons to a group of people. It is not possible for several people to simultaneously possess the same item. The theory the prosecution uses is that you had constructive possession of the paraphernalia. If you did not have control over the paraphernalia, then you can't be charged with possession.

In other situations, defendants may have borrowed a car, jacket, or bookbag from another person that contained paraphernalia. If the accused has no knowledge of the existence of the paraphernalia, then they can't be convicted of possession.

The Object was not "Paraphernalia"

Many objects have dual uses. Rolling papers and pipes can also use used to smoke tobacco. The state has the burden to prove that the object(s) were used to manufacture, package, or ingest a controlled substance.

The Paraphernalia was Discovered During an Illegal Search

In many situations, police discover drugs and paraphernalia by a violation of constitutional rights against unlawful search and seizures. No one should consent to a search of their home, car, office, bags, or person unless the police have a search warrant. Often police discover drugs without following constitutional requirements, and this allows defense lawyers to file motions to suppress any evidence discovered. If the evidence is suppressed, then the charges are usually dismissed.

A Guilty Plea to an Infraction has Significant Consequences

No one should ever plead guilty or pay the fine online for a drug paraphernalia ticket. While just paying the $150 fine may seem like the easiest way to resolve the ticket, a guilty plea can have lasting and profound consequences on your future ability to seek employment and housing.

An experienced Connecticut drug crimes lawyer will be able to either get a ticket for drug paraphernalia thrown out entirely or find an alternative resolution that will prevent you from winding up with a record for this offense.

The penalties vary greatly depending on which of the 4 (four) sub-sections of C.G.S. § 21a-267 you are charged with.

C.G.S. § 21a-267(c) is a sentencing enhancement for subsections (a), and (b) of C.G.C. § 21a-267 which provides for an additional mandatory one-year minimum term of imprisonment for anyone who violates the provisions of subsection (a) or (b) who within 1500' of a private or public school and is not a student enrolled at that student.

Connecticut General Statutes § 21a-267(d) - possession of drug paraphernalia is only an infraction and carries a civil penalty fine only of $150. The problem with this offense is not the fine. The issue is that the record of your guilty plea is recorded with the centralized infractions bureau for seven years and can have significant effects upon your future ability to seek employment. You should never plead guilty to one of these tickets.

This is why we are determined to provide all our clients with five-star customer service and exceptional representation, even when faced with the most stressful and trying circumstances. If you have received a ticket for drug paraphernalia, contact our Connecticut criminal law firm today at (203) 357-5555, or you can contact us online for a prompt response.