C.G.S. § 14-227g - Operation by Person Under Twenty-One Years of Age While Blood Alcohol Content Exceeds Two-Hundreds of One Percent 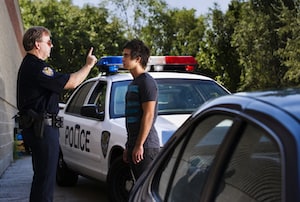 Operation under the influence can involve situations where a motorist is under the influence of alcohol, drugs, or both. Minors under the age of 21 years of age can be charged for DUI if their blood alcohol content ("BAC") is 0.02% or greater. This statue is commonly known as a zero-tolerance law because of the very low BAC standard applied to minors below the legal drinking age of 21 in Connecticut. Under-age DUI is treated very seriously in Connecticut because individuals under the age of 21 are not allowed to drink lawfully.

Statistics show that minors are more likely to be involved in accidents that result in fatalities when they have BAC contents of 0.02% or greater. The federal government enacted legislation in 1995, requiring that all states consider a 0.02% BAC limit for drivers under the age of 21 to qualify for federal highway funds. As a result, Connecticut enacted C.G.S. § 14-227g in 1995 to comply with the federal mandate.

Harsh Penalties for Drivers Under 21

Connecticut's DUI laws have a significant impact on drivers under the age of 21 years of age. A DUI for an offender between the age of 18 and 21 is handled in adult court. As with a DUI allegation against an adult, a minor facing a first- time DUI will have two separate proceedings pending against them.

The first is a criminal proceeding in the Superior Court for a violation of C.G.S. § 14-227g, which is a misdemeanor crime. A conviction for DUI can expose an offender to possible jail time, significant fines, and the loss of the offender's driver's license. In many situations, minors are first-time offenders and are technically eligible for the alcohol education program, which could result in a dismissal of the criminal charges. Getting an application for the alcohol education program approved is far from automatic in cases involving minors driving under the influence. State's attorneys take these cases seriously as they know that underage drinking is a leading cause of death.

The second proceeding is an administrative per se suspension at the Connecticut DMV, which involves the possible suspension of the operator's driver's license. A few years ago, Connecticut went to an all offender interlock program. This means that Connecticut now relies heavily on ignition interlock devices.

A refusal of a chemical test, or a failure of a chemical test with a BAC over 0.02% for a driver under the age of 21 will result in a 45-day license suspension and the requirement to install an ignition interlock device in the vehicle for a period of one year. Motorists have a right to appeal the suspension of their license. It is essential to contact a Connecticut DUI lawyer promptly upon an arrest because you only have 7 seven days to request an appeal of the suspension with the DMV.

Drivers who's license is suspended for a DUI can apply for a special operators' permit that can allow them to drive back and forth to work or school. Even though the suspension only lasts 45 days, if alternative transportation is not available, a work or school permit is often invaluable. It is crucial never to drive a vehicle while you are under suspension for a DUI because doing so is a misdemeanor offense that would subject you to a mandatory minimum 30 days in jail.

Elements of the Offense Which Must be Proven by The Prosecutor

To be found guilty of DUI in violation of C.G.S. § 14-227g, the state's attorney must prove the following elements of the crime:

C.G.S. § 14-227g is a "per se" DUI statue, which presumes that the operator is intoxicated as a matter of law if their BAC test results are over the statutory limit. Connecticut is an implied consent state, which means that motorists must submit to a chemical test of their blood alcohol content if a police officer has probable cause to make an arrest for DUI.

Minors Can be Charged with Adult DUI Also

In some situations, motorists refuse to submit to chemical tests. Minors who refuse chemical tests can still be charged with DUI under Connecticut General Statutes § 14-227a based upon the observations of the arresting officer. When arresting officers don't have the results of chemical tests to support an arrest, they have to rely upon their observations and field sobriety tests to establish that the motorist's ability to operate a vehicle was impaired by alcohol or drugs. Some of the tell-tale signs that officers look for are slurred speech, difficulty in handling documents, lack of coordination, erratic operation, and any admissions by the accused concerning the consumption of alcohol or drugs. When officers make arrests for DUI based upon these kinds of observations, they are not required to prove any specific BAC reading.

A 19-year-old man has two beers at a high school graduation party. Later on his way home, he is pulled over for speeding. The police officer detects the odor of alcohol on the man's breath and asks him if he has been drinking. The man admits having two beers. The officer requests that the man engages in a standardized field sobriety test which the man fails. The police officer then places the man under arrest and transports him to the police station for processing. At the police station, the man is offered an opportunity to participate in a chemical test, and the results indicate that his BAC is 0.40%.The man could be charged with DUI in violation of Connecticut General Statutes § 14-227g based upon his BAC reading over the legal limit of 0.02 percent.

There are numerous effective legal defenses to a charge of underage DUI in violation of Connecticut General Statutes § 14-227g that an experienced Connecticut DUI lawyer could employ.

Since most underage DUI offenders are first-time offenders, they are technically eligible for the alcohol education program, a diversionary program for first-time DUI offenders. Since local judges and state's attorneys take underage DUI so seriously, any application for the AE program for a minor needs to be addressed appropriately. Diversionary programs such as the AE program can result in a dismissal of the charges upon successful completion of the program requirements.

Attorney Allan F. Friedman has extensive experience in assisting youths in getting AE program applications granted. It is essential to take these applications seriously and prepare strong mitigation packages to support them. Attorney Friedman has been defending under-age DUI offenders since Connecticut first implemented C.G.S. § 14-227g in 1995.

For a first time violation of C.G.S.§ 14-227g, you can face up to six months in jail, 2 days of which is mandatory minimum time, a fine of $500 to $2,000, the loss of your driver's license for 45 days, be required to have an interlock device in your vehicle for a period of one year, and perform 100 hours of community service.

If you or your child has been arrested for underage DUI in CT in violation of Connecticut General Statutes § 14-227g, it is essential that you speak with an experienced Connecticut DUI lawyer. Stamford criminal lawyer Allan F. Friedman has the experience to obtain the most favorable result possible.

For more information about defending driving while impaired allegations in violation of Connecticut General Statutes § 14-227g, and to arrange your free, no-obligation, initial consultation, contact Connecticut criminal lawyer Allan F. Friedman. Mr. Friedman can be reached 24/7 at (203) 357-5555, or you can contact us online for a prompt response.