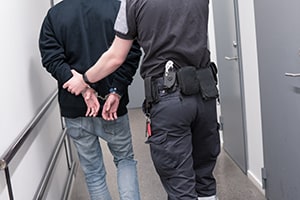 In other states, this offense is known as aggravated unlicensed operation. It is considered aggravated because you are alleged to be driving while you have already been ordered not to drive or use your vehicle by a revocation or suspension order.

This statue is written to cover a wide range of situations that can range from someone who failed to pay a required surcharge payment and had their registration suspended to individuals who have had their license suspended as a result of a DUI related incident. Those individuals who have a DUI related suspension C.G.S. § 14-215(c) or who have two or more prior convictions for a combination of driving without a license C.G.S. § 14-36 or C.G.S. § 14-215 face harsh mandatory minimum jail sentences.

If you are convicted for driving with your registration or license revoked or under suspension, you need to realize that this is a misdemeanor crime and could have significant consequences on your cost to obtain auto liability insurance and the ability to seek employment in certain industries. If you are charged with this offense, you should immediately contact an experienced Connecticut traffic violations attorney.

To be found guilty of operation of a motor vehicle under suspension or revocation in violation of C.G.S. § 14-215, the prosecution must be able to prove the following elements of the offense:

1. The defendant was operating a motor vehicle;

2. The defendant's license or privilege to operate a motor vehicle was suspended or revoked;

b. The defendant's registration was suspended or revoked.

A suspension of a license or privilege to operate will continue until you pay a $175 restoration fee to the Connecticut DMV. Thus, if you were given a 45-day license suspension and never restored your license, you could still be arrested and prosecuted for a violation of 14-215 after your initial 45 suspension had passed.

For those who may be undocumented aliens who have not yet obtained a license, it is important to understand that you can be prosecuted for operation under suspension even though you do not have a license. This is because your "operation privilege" had been suspended in the state of Connecticut.

A woman has had her license suspended for 45 days after refusing a chemical test related to a DUI Arrest. Although the 45 day period of the license suspension has passed, the woman never paid the $175 restoration fee to the Connecticut DMV. She was pulled over while driving a motor vehicle. The woman is not guilty of operating under suspension in violation of C.G.S. § 14-215(c), but she could be charged with the less serious offense of operation after expiration of a period of suspension or C.G.S. § 14-215b which is only an infraction.

The woman in the previous example who was serving a 45 day DUI related license suspension is caught driving a motor vehicle during her initial 45-day license suspension. The woman can be prosecuted for a violation of C.G.S. § 14-215(c) because she was driving during the period of her DUI suspension and faces a mandatory minimum of 30 days in jail if she is convicted of this offense.

An undocumented man who never had a driver's license has two prior convictions for driving without a license in violation of C.G.S. § 14-36 is apprehended while driving a motor vehicle when his privilege to operate is under suspension. The man could be charged with C.G.S. § 14-215(a) even though he has no driver's license because his operation privilege is under suspension. Pursuant to C.G.S. § 14-215(2) the man could face a mandatory minimum jail sentence of 90 days in jail and up to a year in jail.

Most violations of C.G.S. § 14-215 involve the non-DUI related suspensions that do not involve a mandatory minimum jail sentence. A skilled Connecticut criminal defense attorney can often work to solve your DMV suspension issues and provide proof that your license is re-instated to the state's attorney and get these kinds of charges dropped. This is the best manner in which to resolve these kinds of allegations as this will break the cycle of suspensions and leaves you with a valid license. Another option is to use plea negation to have the misdemeanor level charge substituted for a non-criminal infraction level offense.

For offenders with no criminal record who have not used the accelerated rehabilitation program in the past 10 years, the AR program is another alternative that can lead to a dismissal of the charges and prevent additional license suspensions.

For those offenders who are facing mandatory minimum sentences, it is possible for a skilled lawyer to argue that there are mitigating circumstances to convince a court not to impose the mandatory jail sentence. These offenses include those who have committed multiple violations of a combination of C.G.S. § 14-36 and C.G.S. § 14-215 and face a 90-day mandatory minimum sentence pursuant to C.G.S.§14-215(2); and those who face a 30-day mandatory sentence pursuant to C.G.S. § 14-215(c) for operation under suspension for driving while under a DUI suspension.

If there are no factors to support an argument of "mitigating circumstances," the alternative defense approach is often to question the police traffic stop that led to the arrest. Often issues can be identified concerning the officer's claim of having probable cause to make the stop in the first place. If the officer lacked probable cause to effectuate the stop, then it may be possible to toss the entire case on constitutional grounds.

The standard penalty for a first offender, upon a conviction, is a jail sentence up to 90 days and a fine of up to $200. A second offense would increase jail exposure to one year and a fine up to $600. This offense is either a Class C or A Misdemeanor depending on if it is a 1st or 2nd offense.

If the reason for your suspension is related to a DUI suspension, you could face a mandatory minimum jail sentence of 30 days in jail and a significant fine pursuant to C.G.S. § 14-215(c).

Criminal Defense for Operating Under Suspension

If you or a loved one has been arrested for operating under suspension in violation of C.G.S. § 14-215, you should immediately contact an experienced Connecticut criminal defense attorney. Stamford criminal lawyer Allan F. Friedman has the experience to defend you against these types of allegations and achieve the best result possible. Facing an allegation like C.G.S. § 14-215, which under certain circumstances carries a mandatory minimum jail sentence, can be a fearful and upsetting ordeal. It would be best if you had a determined and relentless advocate working on your side to explore every possible alternative to avoid these harsh penalties.

For more information about defending operation under suspension violations in violation of C.G.S. § 14-215, and to arrange a free, no-obligation, initial consultation, contact Stamford criminal lawyer Allan F. Friedman at The Law Offices of Allan F. Friedman located at 24 Hoyt St #A, Stamford, CT 06905. Mr. Friedman can be reached 24/7 at (203) 357-5555, or you can contact us online for a prompt response.