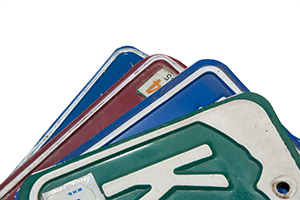 Although it may seem like a minor offense, forging, falsifying, or using registration or license plates from another car is a serious crime under Connecticut General Statutes § 14-147. Many people do not realize that it is a misdemeanor crime to use another license plate on a car. Many of our clients are arrested after they buy a new car, and they use the license plate from their old vehicle to either drive the car home or drive it around until they can get an opportunity to get to DMV and register the car. While this behavior may seem benign, under Connecticut law, it is a criminal offense, and a conviction can have significant adverse consequences.

Another important point to keep in mind with these tickets is just because you were not placed under arrest and taken to a police station does not mean that this does not count as an arrest. If you look on your ticket you will see that it states "Misdemeanor Summons and Complaint.' A ticket for C.G.S. § 14-147 is a criminal offense and will go on your FBI arrest record.

Another frequent problem our clients have is when they alter the expiration date on temporary license plates. This is considered to be counterfeiting a number plate and is also a criminal offense. Finally, it is illegal for someone else's drivers' license. We have seen many clients whos operators privilege was under suspension use the driver's license of another person bearing a close resemblance.

Elements of the Crime That Must be Established by the Prosecution

To win a conviction for a violation of Connecticut General Statutes § 14-147, the state's attorney has to prove the following elements of the crime:

A man buys a car, and the sellers allow him to use the license plate that was on the car to use until the buyer can get the vehicle registered. A week later, a police officer pulls the man over for a moving violation and discovers that the plates on the car are not registered. The man could be charged with a violation of Connecticut General Statutes § 14-147 because he used the registration and/or license plate of the previous owner. In this example, the seller could also be convicted for a violation of C.G.S. § 14-147 because he lent his marker tag to another person.

A man purchases a used car and goes to the DMV to obtain a temporary registration marker to use the vehicle while he receives emissions testing and repairs to get the vehicle registered. The man runs into some delays, and he uses a pen to alter the expiration date of the temporary tag. A police officer pulls the car over when the man runs a red light and discovers the modified temporary license marker. The man could be arrested for a violation of C.G.S. § 14-147 because he altered the expiration date of the temporary license marker.

Defenses to Misuse of Plates

A skilled Connecticut criminal defense attorney can often convince a state's attorney to reduce this criminal allegation to a non-criminal infraction that won't leave you with a criminal record. An experienced attorney knows how to work with you to mitigate your actions and supply evidence of compliance to the state.

Although first-time offenders would be eligible for the accelerated rehabilitation program, the objective of an excellent criminal lawyer is to avoid their client having to "burn their AR" on such a minor offense.

Misuse of plates in violation of C.G.S. § 14-147 is an unclassified misdemeanor for which you can face up to thirty days in jail and a fine of up to $500. Also, you will face a possible license suspension.

For questions about Connecticut General Statutes § 14-147 misuse of plates, or to discuss your case confidentially with Attorney Allan F. Friedman, do not hesitate to call us at (203) 357-5555, or you can contact us online for a prompt response. We have offices conveniently located in Stamford and Norwalk.