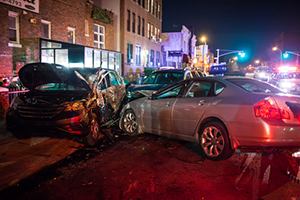 To be found guilty of manslaughter in the second degree with a motor vehicle or C.G.S. § 53a-56b the state of Connecticut has the burden to prove, beyond a reasonable doubt, that the defendant:

As we can see manslaughter in the second degree with a motor vehicle or C.G.S. § 53a-56b does not require an intention to kill anyone or the requirement that the accused acted recklessly or even in a negligent manner. All the statute requires is that intoxication with alcohol, drugs, or both was a factor in the accident. This means that the operation under the influence and it's impairment upon the abilities of the accused was a “factor” in causing the accident.

We can assume that anyone who drives under the influence is negligent, per se, as DUI is an extreme deviation from the standard of care that a reasonably prudent person would exercise. However, it is important to state again that this statute does not require a finding of negiligence. All that is needed for a conviction is a finding by the jury that the intoxication of the accused somehow contributed to the cause of the accident.

In situations where an intoxicated driver is shown to have acted intentionally or recklessly caused an accident that results in the death of another person, the accused could be charged with the more serious offense of manslaughter in the first degree or C.G.S. § 53a-55 which is a Class B felony.

A man is highly intoxicated on alcohol while driving, and he rear-ends another vehicle. A passenger in one of the cars in the accident dies. Since the cause of the accident is possibly related to his intoxication, the man could be charged with manslaughter in the second degree with a motor vehicle.

A man is highly intoxicated on prescription medication and attempting to drive home when he stops at a red light. While he is waiting for the light to turn green, another vehicle rapidly approaches from behind and impacts his car. A passenger in the car that hit him flies through the windshield and dies. The intoxicated man can not be charged with manslaughter in the second degree with a motor vehicle as his intoxication was not a factor in this accident.

Related OffensesDefenses to Manslaughter in the Second Degree with a Motor Vehicle or C.G.S. § 53a-56b

The principal defenses to this offense revolve around negating two core elements of the crime. The first defense is the issue of whether the state can prove beyond a reasonable doubt that the accused was driving while intoxicated. Often these cases involve blood samples taken at a hospital and testing at the statewide crime lab. Any issue with the chain of custody of the evidence can result in the exclusion of evidence of intoxication.

The second area for defense is the issue of accident causation. It is not enough to just prove that an accident occurred and that someone died. The state must prove that the accident resulted in part from the effects of the intoxicating substance. This can sometimes be a hard element of the crime to prove as often it is based purely on speculation and conjecture. The police will often use accident reconstruction methods. A good defense team will bring its own accident reconstruction expert to undermine the credibility of the state’s expert’s conclusions.

Manslaughter in the second degree with a motor vehicle or C.G.S. § 53a-56b is a Class C felony, and you could be sentenced for up to 10 years in jail for this offense, pay a fine up to $10,000 and lose your driver’s license for a year.

If you or your loved one or family member has been charged with manslaughter in the second degree with a motor vehicle in violation of C.G.S. § 53a-56b, it is critical that you immediately meet with an effective and experienced Connecticut criminal defense attorney. With over 25 years of experience, Stamford criminal lawyer Allan F. Friedman is highly qualified to handle the defense of allegations of this nature. Being charged with a serious allegation like manslaughter with a motor vehicle in the second degree can be terrifying and frightening. You need a zealous and determined advocate to defend you and stand up against the state to protect your rights.

For more information about manslaughter in the second degree with a motor vehicle charges, and to arrange your free consultation, contact Stamford criminal defense Attorney Allan F. Friedman at The Law Offices of Allan F. Friedman located at 24 Hoyt St #A, Stamford, CT 06905. Mr. Friedman can be reached 24/7 at (203) 357-5555, or you can contact us online for a prompt response.

Our office is conveniently located one block from the Stamford Court house.