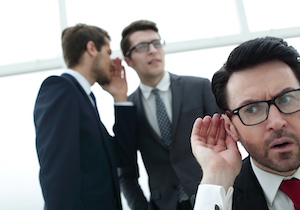 The Connecticut legislature enacted civil and criminal laws to protect the privacy interests of residents. Under Connecticut General Statutes § 53a-189, it is illegal to engage in wiretapping or certain forms of eavesdropping crimes. There are two parts to the statute. The first addresses the recording of telephone conversations. Connecticut is a two-party state and as such both parties of a telephone conversation must consent to any recording. The second part of the statute covers "mechanical overhearing" of conversations. This makes it illegal to plant a recording device and record a conversation when you are not present. It is legal to record conversations that you can over hear with your ear or that you physically participate in.

To establish that the defendant committed the crime of eavesdropping in violation of Connecticut General Statutes § 53a-189, the prosecutor must be able to prove the following elements of the offense:

A woman is involved in a highly contented child custody dispute. She secretly records her husband without his consent when they are having a telephone conversation. During a deposition the woman attempts to play the tape recording of the conversation. The woman could be arrested for eavesdropping in in violation of C.G.S.§ 53a-189 because she recorded the conversation without the consent of her husband.

There is often a lot of confusion about what is legal under the Connecticut eavesdropping statute. It is not illegal to audio tape any in person conversation in which you are a participant or which you can hear directly with you ear. For example you can audio or video tape a recording of what a police officer is saying to a suspect during an arrest. The statute makes it illegal to invade the privacy expectation of citizens by using mechanical or electronic survailence equipment.

Although we are a two-party state when it comes to the taping of phone conversations there are several exceptions which allow you to record telephonic conversations without the consent of the other party. These exceptions include instances where the other party is making a criminal demand, threat or extortion; or situations when you are being bombarded with numerous harassing phone calls or at calls at inconvenient hours.

The penalty for a violation of Connecticut General Statutes Section § 53a-189 eavesdropping is a Class D felony punishable by up to five years in jail and a fine of up to $5,000.

If you or a loved one has been arrested for eavesdropping it is important that you speak with an top Connecticut criminal defense attorney. Stamford criminal lawyer Allan F. Friedman has over 25 years of experience eavesdropping charges.

For more information about defending wiretapping or eavesdropping allegations in violation ofC.G.S. § 53a-189, contact Stamford criminal lawyer Allan F. Friedman at The Law Offices of Allan F. Friedman to arrange your free, no-obligation, initial consultation. Our offices are located at 24 Hoyt St #A, Stamford, CT 06905. Mr. Friedman can be reached 24/7 at (203) 357-5555, or you can contact us online for a prompt response.